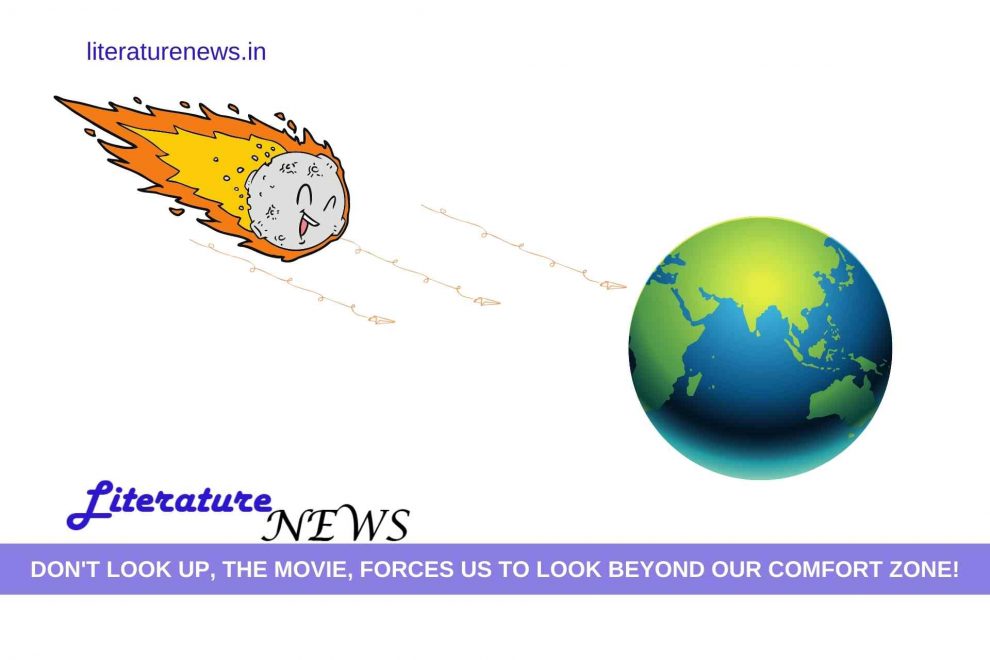 Without spoiling anyone’s experience with the movie, obviously, those who haven’t watched it yet, let me tell it to the readers of Literature News. If you believe in signalling it out without saying too much or conveying an idea without actually conveying it in a conventional way, the movie does seem to let us know something about the current state of ‘affairs’. People are too busy to notice the ‘obvious’ danger looming above in the sky. Businessmen are busy milking every opportunity to encash anything whatsoever. Those who are in power, supposedly, are too busy looking for their electoral gains at the cost of the world, literally! By the way, who did Meryl just ‘Streep’ in the movie – she plays the lady president of the USA. My guess is as naive as anyone else’s.

It is generally believed that movies somehow let us have a glimpse into the future. Especially, when it is about movies that Hollywood has been producing, we can see patterns. Mobile, computers, transparent screens, robots, bombs, weapons of destruction, alien lives, UFOs, social media or programs controlling people’s minds and so on… on-screen prophecies that seem dubious at first, may come true in coming years. We cannot be certain on either side.

Leonardo DiCaprio’s composed but shaky portrayal of a sincere to his profession professor of astronomy has much to convey to a large audience. His conscience constantly pricks him and he ultimately does his best to make people aware about the doom’s day that’s certain, almost. The movie also hints at the possible exploitation of events, ideas, and even fear among the masses by people with a vested interest. BASH’s founder Peter Isherwell literally tries to bash and cash the deadly fatal comet coming to swallow the humanity on the planet earth… the lady president of the United States also gives in to the whimsical and not-so-sure agenda of the tech giant because he has been funding her party…

Well, if we can ignore everything and just enjoy the movie… that will be the wisest thing to do. However, if we consciously watch the movie then one is almost compelled to think whether things are going to come knocking on our doors, sooner rather than later. We cannot escape the escapist nature that we have recently been enjoying. The movie just puts things in a clear view for us and we cannot ignore many of those. Did you watch the movie already?

Now that the world is banning Russian art, literature & culture, what is stopping us from banning the British literature?
Ashwin Sanghi above any other Indian author, any day! Opinion
Comment