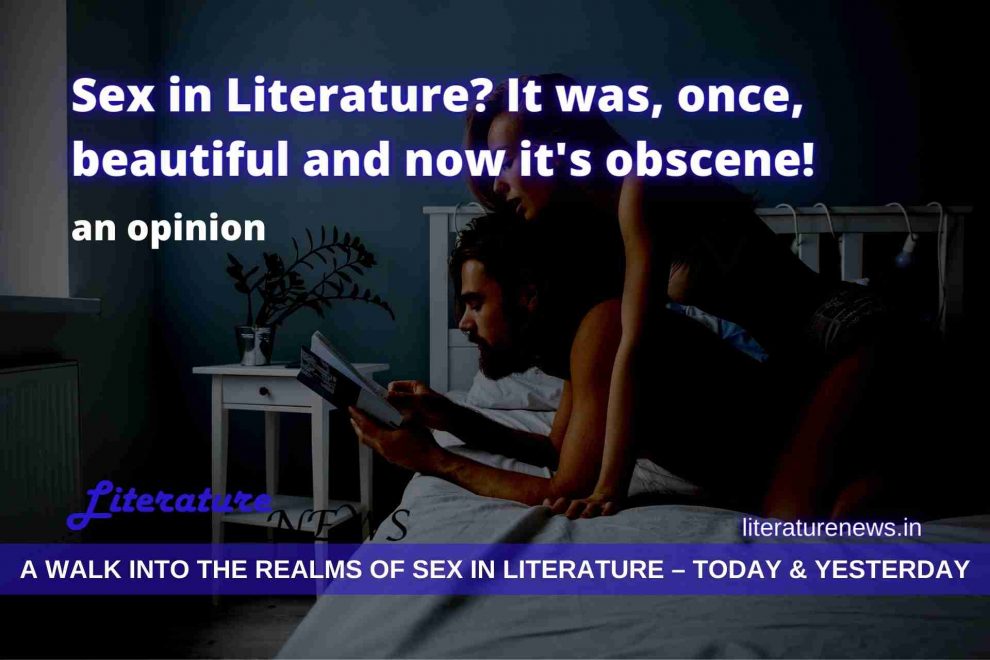 Modern literature in English, the books published after 2010, mostly, have been popular because of many factors that have affected the sensibilities, choices, preferences and ideals of the masses. However, for a certain group of readers, increasing obscenity in casual literature is also a reason that has increased their interest in literature, frequency in buying and reading books and also took them away from what we can call sensible and meaningful literature. Well, all of it, most of the times, comes down to the description of sexual and intimate moments in literary work. For example, works like Fifty Shades of Grey have taken it too far, when we talk about the international literary horizon.

“I want to fuck your mouth, Anastasia, and I will soon,” his voice is hoarse, raw, his breathing more disjointed.”

This comes from E. L. James’ novel Fifty Shades of Grey and the extract below may be said to be something more:

“Keep still,” he orders, his voice soft but urgent, and slowly he inserts his thumb inside me, rotating it around and around, stroking the front wall of my vagina. The effect is mind-blowing—all my energy concentrating on this one small space inside my body. I moan.”

So, anyone can read, the intimate moments have become intense (in the literature of the day) and their descriptions have become raw, direct and even more than what could actually be. And this may be called a sudden outburst because mainstream literature has been filled with such works by the novelists who have taken it to the next level while describing the sexual scenes. In India, authors like Chetan Bhagat and Durjoy Datta (and many more) have begun providing a special set of readers with the literature that surpasses the perception of Mastram and brings it all on the pages what cannot be exhibited even in the inline content platforms.

“He kissed my nipples. He moved up and kissed my collarbone. He kissed my chin and then my lips for several minutes. He tugged at my panties. My heart beat fast. Was I really going to get fully naked in front of a man?”

Chetan Bhagat makes it even local for Indian readers and meet their fantasies, almost. And there are his followers and many new authors who are coming up with even ‘better’ versions, even more explicit details. It makes things aroused for a moment or two, an hour or two and may meet the sexual fantasies of readers (especially teenagers and youths for whom things are all new). However, in this process, what we forget is ‘fiction’ and the target readers of these authors seldom judge such books on merits. Problem for none and a win-win situation for the novelists.

In those days, when the authors like Lawrence and Hardy tried to portray sexual actions on the pages of their novel, things were very different and everything was almost ‘beautiful. Things were suggestive, narrated wonderfully and also felt good to read. This may be coming out of my bias for classics and against the modern nonsense which is served in the name of realism. However, you can realise more if you read these lines by Lawrence which detail a scene of love-making between Paul and Miriam in Sons and Lovers:

“She put her hands over him, on his hair, on his shoulders, to feel if the raindrops fell on him. She loved him dearly. He, as he lay with his face on the dead pine-leaves, felt extraordinarily quiet. He did not mind if the raindrops came on him: he would have lain and got wet through: he felt as if nothing mattered, as if his living were smeared away into the beyond, near and quite lovable. This strange, gentle reaching-out to death was new to him.”

And you can feel the sentiments in the extract below but you cannot find that obscenity:

“And afterwards he loved her—loved her to the last fibre of his being. He loved her.”

Now, the readers may have their say on what they want to enjoy and to which extent. There is nothing that I would ask them to leave or accept. However, as a critical thinker, I find modern description of love-making rather elaborated to the naughty sides of our conscious. It is, however and somehow, doing great with the time.