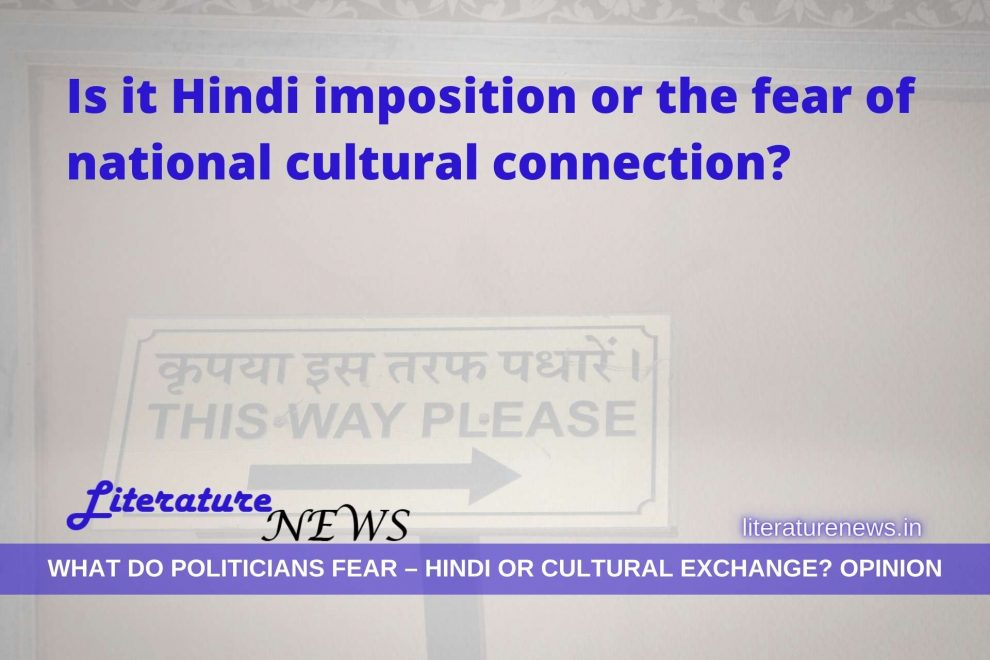 In a recently manufactured controversy, many regional political parties (led by the broken-rib national party Congress) opposed a statement made by the home minister Amit Shah. The statement was moulded into something that suits the agenda of many in India. The statement called for using Hindi as an alternative to English while preserving the local languages of different parts of India. Hindi imposition – something that regional parties have been using for decades to run their political ovens – is a spin that keeps many away from learning the language used by almost half the population of the country. This hatred comes mainly from the parties in TN, Andhra, Kerala and Telangana. It is more than surprising that the political parties in these states are more than happy ‘imposing’ English on the citizens, a language by the oppressors who exploited the nation for more than 200 years (at least). Moreover, it is shameful that many pay for learning this language.

More than fear, Hindi Imposition is a narrative that is used by the political leaders to keep the subject of the state away from the national discourse. Parliament discussions, hot media discussions, many political newsbreaks, the speech made by the PM or the president, and controversial or overwhelming remarks made by the CMs of the so-called Hindi-heartland are more than often in Hindi. If people listen to the same directly, they will know exactly what is there. However, the linguistic gap lets the vested media and political parties add their spins and use ellipsis as they will. This changes the scenario completely. People listen to what those in power want rather than listening to what was said exactly. And it is what it is.

I don’t see any other logical explanation for this manufactured fear. Nobody is saying to remove the regional languages and forcing everyone to use the same language. India is a land of vivid languages, cultures and even civilisations. We have preserved these for many centuries. However, what’s the problem with replacing the second language or an alien language with a language of one’s own? Hindi is our language. English is a language that was imposed upon us. This was the imposition that had to be resisted and we didn’t. Now, people are unnecessarily reacting to suggestions of a second language that binds the nation as one.

What is the language of people in France? French. What language do people in the USA speak? English. What language do people in Russia speak? Russian. However, what language do people in India speak? We have many and we are rightly proud of the same. Nevertheless, just imagine what a unifying second language can bring to the table? Many things – opportunities for jobs, new dimensions to the growth because people will be able to interact more comfortably knowing there is a language that both the parties understand, a globally rich language compelling content-creators to learn the language and thus adding more to our soft power, and the opportunity to read and revel in the rich Hindi literature by the figures like Nirala, Pant, Dinkar and Premchand, without any layers of rendition.

If someone opposes it just for politics and vested interest, they are the real enemies of regional culture and the riches of language. They are limiting people within one sphere and not allowing them to interact with others for cultural and linguistic exchange to become possible. What do you think?

An opinion by Devendra for Literature News

Understanding the weird – Genre Fiction and its mechanism
Do we have to interpret literature in its wider context always? Opinion
Comment