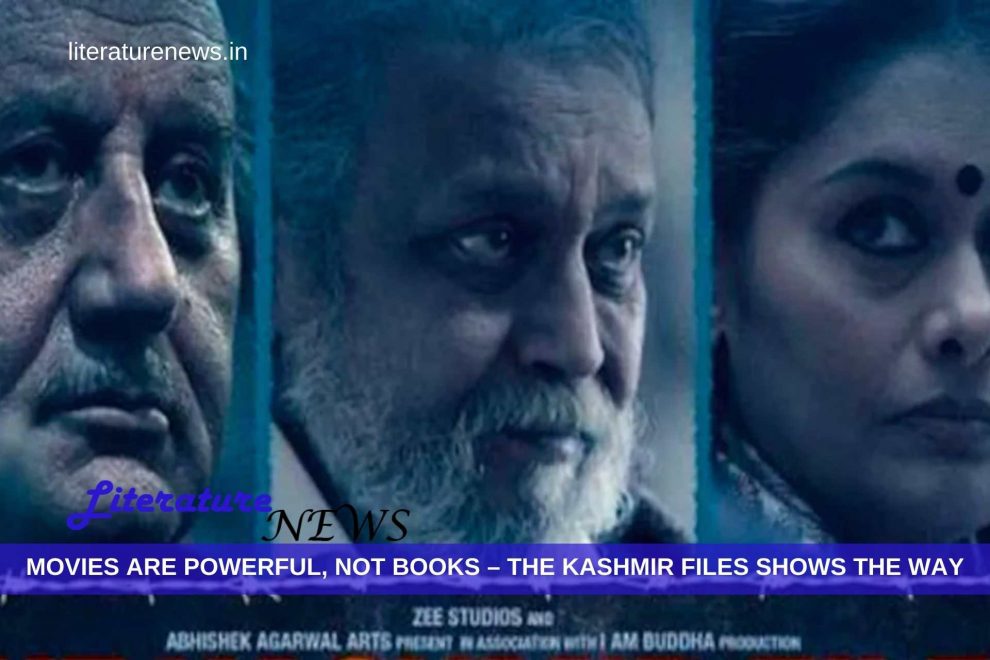 I was also among those who believed that letters might have more impact on the human mind than any other form of art. Articles, books, columns, editorials, magazines’ dedicated issues and others may impact growing people more than movies, tv shows, web shows and documentaries. It was my firm belief. However, with the release of The Kashmir Files, what I believed erstwhile has gone into the background. This movie has single-handedly shown the world what we did never get to know. We kept believing in Aman ki Asha and Bhatke Hue Naujawan and school master’s son theories and also the inhumanly conceived ‘economical disparity’ by a very not(orious)ed journalist named Barkha Dutt. However, this movie by Vivek Ranjan Agnihotri, with a once in the lifetime performance by Anupam Kher, has turned the tide against all those fake narratives with which the apologists tried to cover the genocide of Kashmiri Hindus with words like Exodus, better opportunities, flew away, went because of, see that, see this too… blah blah blah! Above anything else, The Kashmir Files proves that movies are the most effective tool to spread messages, be they positive or negative. I did not watch Haidar but I came to know about Shaitan ki Gufa… see the power?

Editors used their clout to direct tv shows and news shows to paint the genocide in white. Many newspaper articles and editorials were written to show that the genocide never happened and it was a hype or inflated figure by the right-wing groups and political parties or people with vested interests. Nobody cared to bother about people living in their own country as refugees, leaving everything they earned and built behind them. Was it not proof enough for the world to see what might have transpired? However, the intellectual clout of certain people with truly vested interests did never let the truth come out.

The Kashmir Files not only proves that movies are a great tool for propaganda (in both ways) but also becomes a case study in the proper sense. So, anyone who would like to know how to break the cobweb of fallacies and deceit, look at what the director and producer of this wonderful movie have done.

The governments run by the BJP across the nation have made the movie tax free in their states. However, we are yet to see any action by the usual movie buff Aravind Kejriwal and others who were too eager to pronounce their reviews and also inspire people to watch certain movies. Yes, politics and art go hand in hand and this is not a big deal to witness varied opinions among political parties in a country. These are the people who don’t even agree in acknowledging the existence of terrorism in a certain ideology! Let it be!

To conclude what I started in the very first paragraph of this article, movies are bigger than I used to think. Movies are any day bigger than the best books. I accept. And therefore, visual literature is the demand of the day.

Do we have to interpret literature in its wider context always? Opinion
Now that the world is banning Russian art, literature & culture, what is stopping us from banning the British literature?
Comment