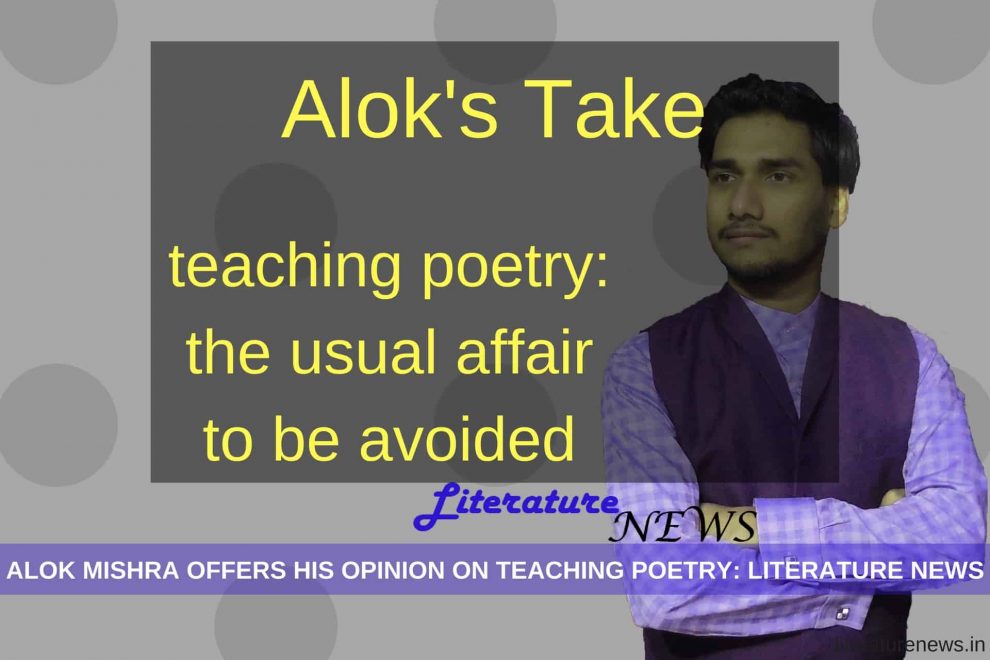 “The poet says that…. xyz.”
“The poet believes that… abc.”
“The poet presents to the readers that… mno.”

I was often bewildered thinking about those hotlines which connected some of my professors with the poets like John Keats, Wordsworth and Milton. The biggest surprise was that how could the professors sitting in the classroom be so sure about what the poet is saying in any particular poem. And I am sure that most of the students who have studied literature (especially in India because I am not sure how it is done in the foreign universities) must have undergone such situations. It is a typical trend which spreads in the Indian classrooms full of students studying poetry – a professor, howsoever young or matured, does the same! (Most of the times.)

What should be a standard method of teaching poetry to the students of the senior classes or specifically the graduation and post-graduation students? Can there be a better approach which can be accommodated by the university and college faculty members? Right now, most of them lean towards the authoritative method which rather tends to kill the free-spirit in the students; they are, in a way, limiting the free play of interpretations by ‘dictating’ to the students – see, this is the interpretation of the poem and you cannot go ‘beyond’ this. Here, one can argue that they are teaching the ‘standard and accepted’ version of the poem’s interpretation. However, my question is, then, who has certified a certain interpretation of a certain poem as standard?

I remember very well the incident in the classroom. The days were the days of glory – I was the college student pursuing my Masters in English Literature. Students were given a task to comment on ‘certain lines’ of a poem by Sarojini Naidu. I won’t name the professor who has given us the task in the class. However, when I ‘offered’ my ‘comment’ on those lines, that was ‘rejected’ and I was left with a confusion – if we didn’t have to ‘comment’ why were we given the task of ‘commenting’ at all? Instead, we could have been told that please ‘memorise’ this interpretation and write it and show me. After all, we were the students of the second year, MA! We had to have the sense of ‘commentary’ on certain lines which qualify to become a literary creation! And honestly, then only I understood what was lacking in our higher-education when it comes to teaching poetry – ‘freedom of expression’ in its truest sense!

I firmly believe that there cannot be any ‘limitation’ when we talk about the interpretation of a poem. It can acquire any breadth and length if the final construct has all the elements of a construction in the proper proportions. If a student is offering a certain interpretation which is logical and satisfies a constructive idea with valid arguments coming very much from within the lines of the poem, that should be taken seriously and a professor must not ‘quash’ that idea and pin it down with the ‘certainty’ God knows who propagated! When the classroom where poetry is taught be truly liberal?

Well, I am still a child when it comes to ‘teaching’ poetry and I cannot be certain what can a good method be! However, I think that teaching of poetry should be conducted with a ‘logical freedom’ where the students also have the liberty to let their minds run in different directions the lines within the poem are taking them. A poem can have many interpretations because never it has happened in the history of writing that a poet himself or herself has offered the ideas behind a poem (take Eliot as an exception). Then, my question is, how can our professors be so sure that a poet is saying this or that? There is something certainly lacking which needs to be amended or we are going to lose the free thinkers or the possible critics to come! We have maintained the status quo for so long and it needs to be broken because students will be prepared the way we prepare them. If we want to have a global representation in the terms of literary participation, we have to bring the innovative ways to teach poetry or if this continues to be the base, expect nothing more than the usual affair!

I couldn't agree more Alok! I welcome the varied interpretations of my poems that often come from creative minds. To stifle creativity is a sin! – "Art is the last great freedom. The colours on my palette are infinite." – pj johnson Poet Laureate of the #Yukon

The Waste Land by T. S. Eliot and why it’s still popular
Poetry and the challenges! writes Alok Mishra
Comment