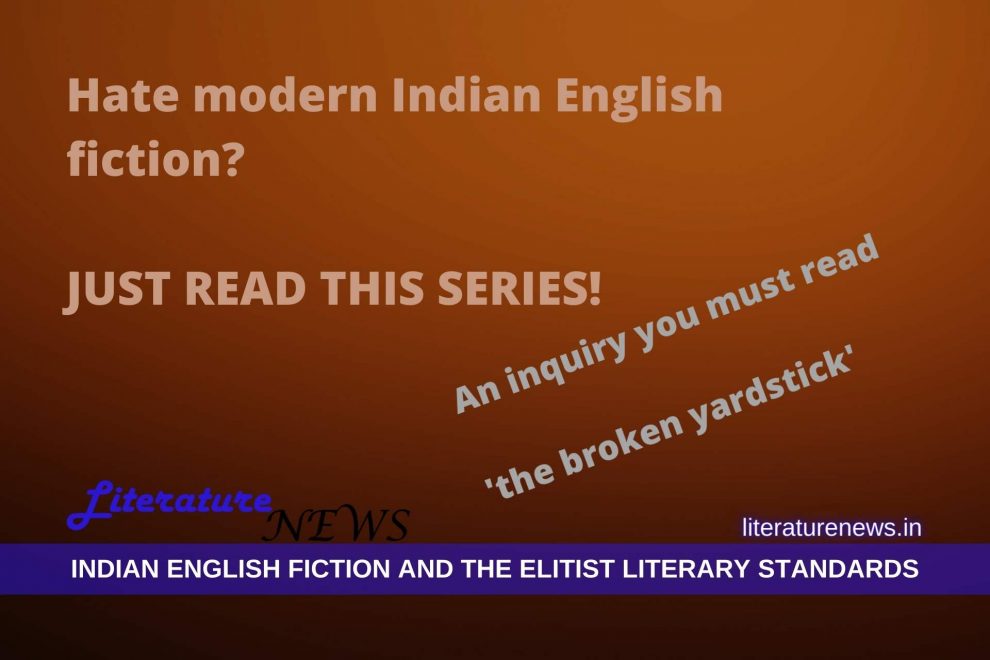 Bloody hell! Dan Brown, shit man! How can he write so amazing!

What? New book out by Rowling! How can I miss this?

True? New book by Twinkle Khanna? My god! She writes amazing… literary nectar blurs out on her words! Gooood!

I don’t know what you might tolerate but, as a reader and as a person actively absorbed in literature, I get to hear these fake-accented and forcefully extradited expressions almost every day as soon as any discussion on Indian English fiction emerges. There are the readers who just don’t like anything written by Indian authors who do it for the entertainment of the readers or for their commercial goals. Nothing is wrong. Yes, they might lack many things. They might not have the delicacy in the language that Jane Austen used to have when she dealt with the same old, redundant and over-repeated themes in her novels. Yes, Chetan Bhagat might lack the artistry of imagery that Thomas Hardy used to fuse with his overt pessimism when he wrote about frustrated but loyal lovers who just could not look away from their fading away beloveds… Yes, Amish Tripathi has his very personal style of writing mythological fiction and he does some manipulations to add a little extra spice and gives his readers too much to think and enjoy. Yes, there are purely soft-porn writers who can use a few scenes of detailed intercourse – exactly the same or a few levels up served in the Bollywood movies minus the nudity and with added lustful gestures and obscenity. Elite readers are fine with everything else in everything else except for fiction by modern Indian writers writing in English.

These are the same lots who can judge a person by his or her English even if the person comes from a background where children are still born to their Indian parents who live in India and never travel away. These readers do not care that books by contemporary Indian authors who are very famous are read by millions of readers and many more are being added to the list of readers every day. Well, or is the case something entirely different? Are they frustrated and dried because many readers are reading such books ignoring their regular rants against the same?

India is the fastest rising industry in publishing, book marketing and literary business. Almost every author in the world wishes to launch his or her book in India and possibly in a language that most Indians can read easily. Why? They know that Indians have started reading books more and more (and thanks to so-called popular fiction writers). And this batch of readers in a large number cannot fathom the imagery of Bronte sisters or even Adiga for that matter! These readers have moved away from politically charged but literary deranged literature written by the authors like Rushdie and Roy. They want entertainment served to them in simple English and that will do… modern authors in India have started doing that for almost two decades now and this might be unsettling for many critics who thought, for a few centuries, that writing and reading should be limited to chosen few. Well, this myth has already broken!

Today, literature is not limited to Shakespeare’s dark lady’s hair curls or Marlowe’s Hero’s mesmerising beauty. Literature is neither conformed to the Victorian mental tennis throwing the ball of reason and sentiment to all corners of the literary court. Literature has moved away from the barren lands ploughed by Eliot. Literature is not free to be concocted by Roy and Rushdie. Literature is free to be explored by any Bhagat with limited skills as an author or Ashwin Sanghi with his wonderful imagination and thoughts combined to create some masterpieces that readers across the spectrum of thoughts love! The yardstick that used to manipulate the myth of literary standards have broken already and those who used to have this stick are not heard, not paid attention and have already vanished into oblivion. Is this the problem? Is modern Indian English fiction worthy enough to be defended? Should we have an open-minded debate?

We will discover more whys, hows and whats in this series in the coming articles.

Chanakya of the 1990s by Dr Chandraprakash Dwivedi is far superior than Game of Thrones!
Amnesty by Aravind Adiga – a free pass to the white and (prejudiced) brown people in the shadow
Comment