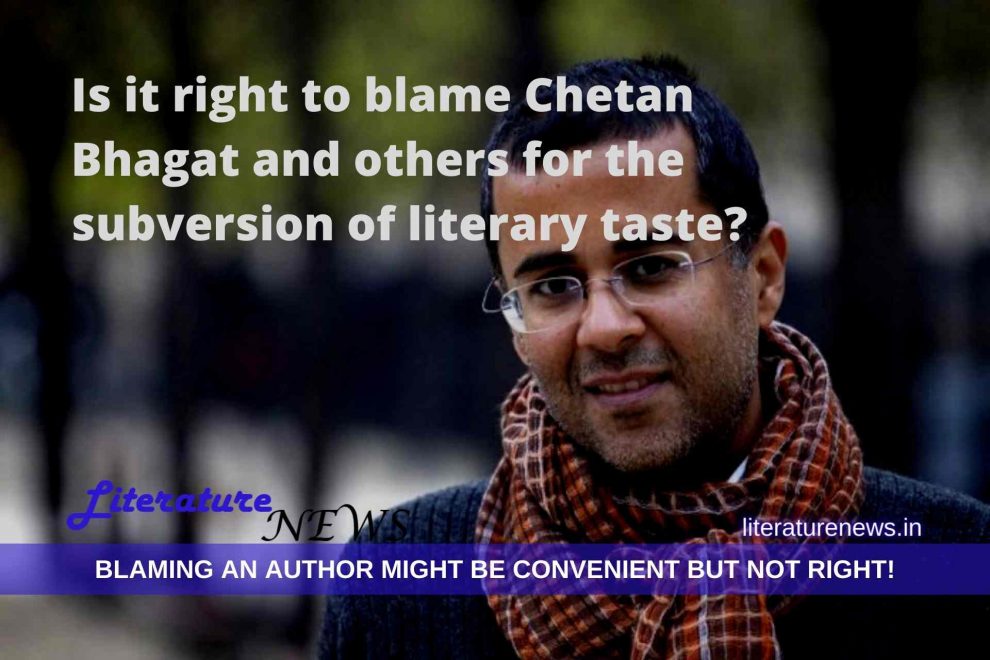 There might be a thousand opinions on a subject or issue and yet a definite conclusion might still be away of reach. Opinions are, indeed, helpful in reaching conclusions. However, when it comes to literary dilemmas, opinions are merely a tool to further perplex the course of reaching a closure (most of the times).  Talking about Chetan Bhagat, besides his pendulum-like approach that keeps him swinging from point A to B in many of his approaches, his writings are no more a subject of literary conjecture. With one after another of his publications, he has made it sure that his works remain popular among youths who seldom have a real taste of literary standard and qualities that ‘good’ books have. While this profile on The Indian Authors’ website sums up Chetan Bhagat perfectly, this is a report that suggests how Chetan and his ‘Chhota Chetans’ have been instrumental in turning the seriousness of literature into a casual approach to widen youth readership.

The biggest gambit extended by the young novelists, after being inspired by Chetan and Shobha De (who, albeit, has some issues to contribute other than plain erotic fancies), is the inclusion of sex in their novels as item songs in Bollywood movies. While there is nothing that’s bad in beds and bedrooms featuring in novels, there is something that we call fitting with the flow and something that seems outrightly injected, even forcefully, in the narrative. There are novelists who seldom go out of their limited periphery of sex, lust, passionate stories and betrayal. Chetan Bhagat, the guiding light of many emerging novelists, has forged his so-called women-centric novel One Indian Girl into merely a sexperience narrative with unnecessary details of sexual intimacy, rather shamelessly. And this is a major reason his novels are popular with page numbers…

Likewise, many novelists of the current generation indulge themselves in romantic storytelling with a number of detailed scenes that render so well visually… like a c grade web series you can watch on many websites. And, unfortunately, you cannot even criticise them because many will come defending with arguments like ‘creative freedom’ and ‘readers want these’. While the argument that readers want to read such novels might seem validated by the numbers of books sold by these amateur literary personalities, it is also evident that no sensible person wants him or herself to be known to be readers of such novelists.

The charge in the title needs to be fixed. Is Chetan Bhagat solely responsible for the deteriorating literary taste among youths in India? Well, the honest answer should be no. Our literary taste is ours and we cannot blame an author for this while pretending to be passive. Readership of such non-standard pieces of literature has certainly increased after the popularity of Chetan Bhagat. This is also a fact. Chetan Bhagat has inspired a line of novelists who focus on somehow increasing their reader base by producing just anything they like, cocktailing it with some sexual stuff and selling it with some passionate, sleazy and lustful love story. And it works!

Literary values of the works produced by Chetan Bhagat and his clan are absolutely zero. You cannot find something commendable or visionary. Chetan can turn political fiction into an erotic excursion and still appear on BBC to accept humbly that he doesn’t want his novels to stop with one or two readers by being literary. Well, one has to give it to his honesty, unlike many others who claim to be literary with absolute nought in their substance. Still, blaming only a person who is doing all he can to produce works that sell might sound unfair. Yes, partly, the scenario is also because of high-thinking intellectual who produce novels that are way more propagandist in their content to be consumed by the masses, middle-class readers and school-going youths who find it rather convenient to spend their leisure with Chetan Bhagat’s Half Girlfriend rather than Ghosh’ propaganda or Adiga’s agenda or even Lahiri’s deliberate and marketable diasporic sentiments.

At the end of everything, you are the reader and someone is an author. You read what you want. They write what they want.

How the internet has changed the literary landscape in India (and the world)? A Report
When you become a famous author – you are paid to talk on phone!
Comment