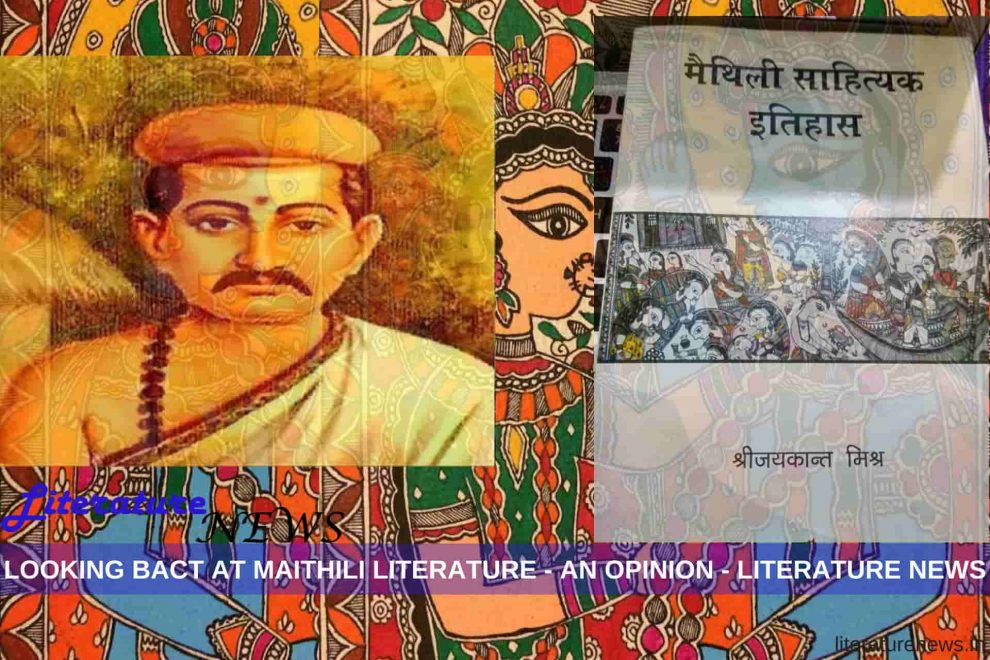 Maithili Literature, though Mithila Paintings are world famous, isn’t that popular. Outside the Mithilanchal circle or if I become gracious enough to let my thoughts wander, outside the ‘Bihari zone,’ Maithili literature is rarely talked, discussed or even read. The fate of Maithili, even after being recognised as a registered language, could not become elite as the colonial legacy enjoys – the language in which I am writing about my native literature – such a humongous elitism English enjoys that I have to use it to make the readers understand what I am trying to convey. So, why has the Maithili literature not flourished like literature in other languages? I will try to put forth my opinions on the same today.

It originated with Adi Kavi Vidyapati who was very famous in his lifetime for his hymns and verses to Gods and Goddesses in Maithili. His hymns are calm and serene and offer a natural respite to the readers. Though it was long ago that Vidyapati wrote, he is still, undoubtedly, the most popular figure in the mainstream Maithili literature. Other than him, no one enjoys such popularity and respect.

After the death of Vidyapati, the Maithili literature almost remained mute and once again it fell back as the language of conversation instead of being the language of literature. Though very famous saint and poet, Srimanta Sankardev, often used an ancient form of Maithili in his creations for intense emotional and dramatic effect. Another such poet (rarely known among the scholars because of so many versions of folklore related to his birth and identity) Govindadas, is said to be the creator of many Maithili poems of great lyrical qualities. After him, the Maithili literature went into a void period and it was a dearth of tall figures who could give it the fame and reputation it deserved.

Though there are many Maithili poets, writers, dramatists and others who are making the Mithilanchal proud and keeping one of the greatest Indian literatures alive, it still needs very much. I am very lucky to be related (from a little distance) to one of the modern greats in Maithili Literature – Chandranath Mishra ‘Amar’ who is the father-in-law of my sister (my mother’s sister’s daughter). His endeavours to keep the tradition and magic of Maithili alive have been tremendous and he does deserve respect for that – and he got; he was awarded the prestigious Sahitya Akademi Award in the year 1982.

Nevertheless, my ignorance of the great Maithili literature was corrected by the book that I purchased from the Publication Division in Patna. I read this great book in Maithili by Sri Jaykant Mishra, Maithili Sahityak Itihas (The History of Maithili Literature). He has done a very good job in explaining the basics and the nuances as well as the depth of Maithili literature.

So, this was my simple look-back-once into the Maithili Literature and I hope it will work for them who want to know more about it if they read the book if they get a chance. On the other hand, it’d be great on part of the government to encourage the young writers in the Maithili language by offering them incentives and awards and also by organising competitions for them. We should surely take care of the language and for that, we must take care of the literature in this language – live it, love it, read it, write it!