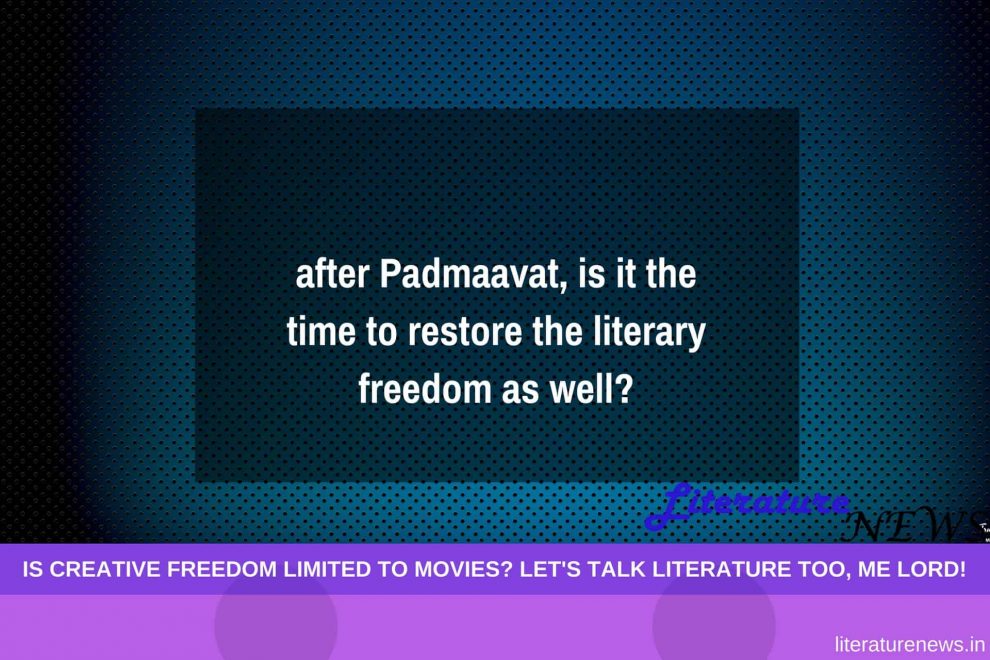 After the ban on the movie Padmaavat has been revoked by the Supreme Court of India, many people are asking whether the Supreme Court of India will really live up to its stance on upholding the freedom of creative thinking by revoking the ban on the literature imposed many times by the governments. After all, written literature is also creative and banning the same tantamounts to strangling freedom of expression which Supreme Court of India must intervene and safeguard. Today, I am exploring some of the most-known banned books in India with a hope that readers will get their chance to read these books very soon.

The Satanic Verses: The book, as often claimed, has nothing to do with the criticism of Islam. As often is the case with Rushdie, he has written this book wonderfully in his unique style and portrays the disenchantment of immigrants with the places they come to dwell and the places from where they come. It was banned in India (by the Congress government) because the government feared that it spreads hatred towards a community which was a bogus claim to retain the usual vote bank in India. And we saw that creative freedom of expression was summoned to death that time with no ‘intellectuals’ from India coming forth to defend a fellow artist! I have no hope though that the Supreme Court of India will ever intervene in this matter.

Lajja – Shame: Lajja is a 1993 novel by Bangladeshi author Taslima Nasrin (currently in India because Bangladeshi Muslims have thrown several death threats towards her). This novel traces the plight of a Hindu family under the shadow of death in Bangladesh after the 1992 incident of Babri Masjid demolition in India (Ayodhya). This book was also banned because Indian Muslim leaders felt that it showed them in a bad light. The government cowed down to them. Literature was once again strangled and no intellectuals showed the spine to come forth and defend the author. Taslima Nasrin was even stoned (even) in India during a program by some Muslim fringe elements. Though I do know that Supreme Court will not intervene in this matter as well. (By the way, Lajja is available on Amazon India and other stores for the readers.)

Riddles in Hinduism: This is a book by Ambedkar which openly lampoons the Gods and Goddesses revered in Hinduism. Though it was banned by the government after the protests by some Hindu foundations and individuals, the book subsequently emerged in the market and it is available for the readers now. However, at the time, this book was also banned and it was certainly a case of suppressing the freedom of expression of an author!

Understanding Islam through Hadis: This was a 1982 Book by Ram Swarup which tried to explore the Quran. However, the Hindi translation of the book which was to come out in 1987 was banned by the then Government of India because of unknown reasons. There are various records openly available which suggest that the government tried to implicate the book for the reasons of communal disharmony. However, just because a particular book explores a particular religious text in a particular way, the government or some other religious organisations have no business banning it. Riddles in Hinduism came out eventually and is today freely available; what about Understanding Islam through Hadis, dear Supreme Court? Creative freedom of expression was strangled yet again!

Now coming to the opinion – the purpose of this article, I know that this opinion won’t count much. People will be doing what they do the best – ignoring things and going on 9 to 5 and 12 to 6. I don’t care either! However, for a moment, let’s hold back and think. Where have we come? What’s the game? What’s the design? Why do people tend to ridicule others without any reason whatsoever? I still have in my mind the fresh case of Wendy Doniger’s The Hindus: An Alternative History which was initially banned and then the ban was revoked and the book is still available in India. I uphold her freedom and I support her creativity too. Nevertheless, as the title suggests, ‘alternative’ history of Hindus, what was an alternative? Why there is a need for an alternative? Where is space to say that sexual blackmail was used to sway King Dashratha and force him to make Bharata the king and send Rama to the exile – in the forest? Is this alternative? Yes, the staunch ones in Hindu community and the extreme ones will retaliate and it will create a furore and the book will gain notoriety and people will eagerly wait for it. However, not all the banned books are noteworthy. And I dare say that the authorities are also sometimes prejudiced or biased against particulars (I hope you understand my point). Alternate History of Hindus can sell well in India without a problem but even a slight satire on Quran (supposed) cannot even find a space? Where are we heading? Are we trying to create a society where books can lampoon (and the movies as well) a particular religious community and if it is otherwise, there will be entire machinery standing to ban it? You have to take the call, my lord!

Indian Literature & Literary Awards: what we have been doing?
Poets on Poetry & modern definitions
Comment