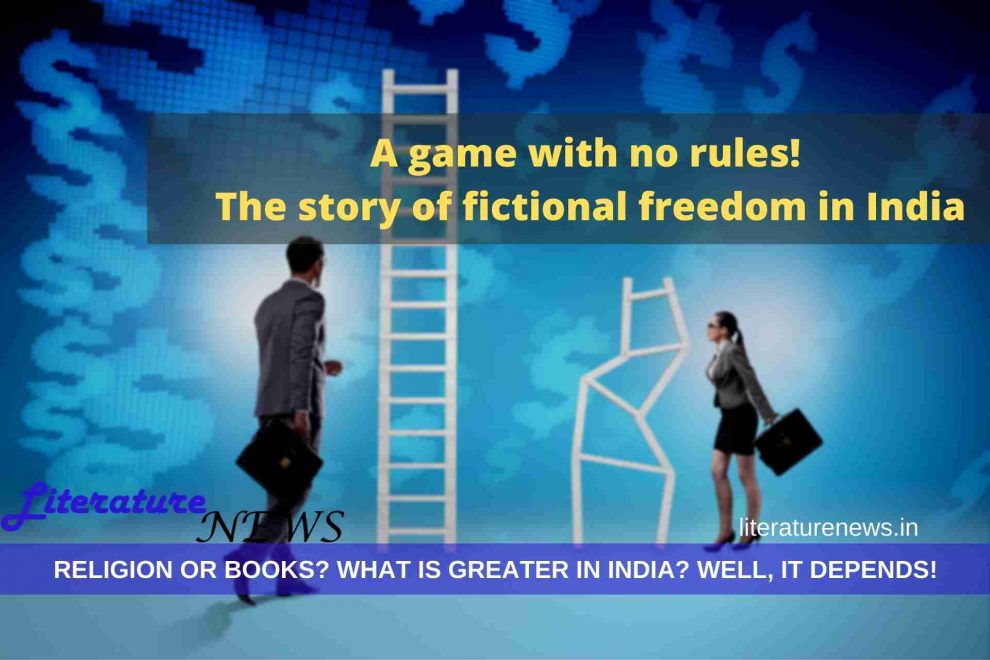 At the outset, let me tell the readers that literary freedom in India is one-sided, biased and too shallow to be substantial and strong enough to safeguard the literary figures. It is truly unfortunate that in India, such a big country with such a big market for books and unlimited opportunities for the authors chooses a religion over books and books over religion based on the choices and inputs of certain influential people. It has been a common practice in India, through the years, that we have been banning books, faltering under the religious pressure. However, the game has not been fair for one certain community. Why do I say so? Let’s try to understand.

Fiction is freedom realised. The moment we say fiction, the person listening or reading anything is liberated from most of the biases as we all know that fiction knows no boundaries. Those who have a literary background will understand this very important aspect of fiction that it can have a license to bring to life the dead and send to the gulf of death alive! Fiction is powerful. However, just ask this statement in question form. Should fiction have absolute power? With absolute power, should there also be a certain degree of responsibility? When exercising power, whether absolute or limited, should fiction be biased against any particular community, religion, idea or anything?

This issue has to be debated now. Anyone with a conscious mind which reacts to sensitivity should remember what happened to the guys at Charlie Hebdo when they ‘merely’ created cartoons of a certain Islamic prophet, the respected figure in that particular religious belief. What happened? If you have forgotten, let me remind you that it was January 7, 2015, and two fundamental Islamic terrorists shot the entire staff in that office just because of a cartoon. 12 died and 11 were critical. A certain author from India, Salman Rushdie, writes a book and he is not only banned but banished. A certain Tarek Fatah is taking refuge in different countries because he is banned and banished from Pakistan, his country. And there are countless cases when religious fundamentalists from across the breadth and length of this world have reacted to the literature they could not approve. And the reaction matters because, at times, it becomes violent and physically harmful.

However, there is also a very subtle part of this story that we often ignore. Why? Because we (and it involves us at different levels and occasions) enjoy when ‘our side’ winds and ‘their side’ loses. Fictional liberty in India has often been used against one certain belief system, one certain religion and one certain community: Hinduism, Hindu and Brahmins, respectively. There are countless examples that anyone can take up from various literary works. Be it Ramayana: A True Reading by Periyar or the contemporary work Asura: Tale of the Vanquished by Anand Neelakantan, the literature in India has always shown a tendency to launch slur in Brahmins and Hinduism from behind the veils of fiction which act as a shield. What does it show? A fictional work can show Ram as an oppressor of dalit rights, women and even a cruel and egoistic king but that easily works as usual because the author has put a disclaimer, ‘this is a work of fiction’.

On the other hand, I dare any author write against Islam or Christianity in India! Can anyone do so? Who doesn’t love to be alive and abuse one certain religion which is rather peace-loving and take things sportingly! A fiction can assume that Ravan was a great warrior who fought for honour but tries to be rather ‘firm and factual’ that Ram, along with Brahmins, tried t usurp the lands of Rakshas or the Asuras. However, even a low hissing sound against the assaults on women in Islam or the roots of Jesus in Christian faith can land someone in jail or even banished form a country or, in the worst case, get someone killed. Krishan Prashaad Prataab, sadly, was one of the first to taste death by the hands of a fanatic!

Amish Tripathi can sit home and write that Ram was jealous of Sita. Arundhati Roy can keep howling in the USA about increasing intolerance in India and still wanders around freely in the country criticising a certain politician day and night and keeps abusing certain people in her second-class propagandist literature but a person, as famous as Dan Brown, cannot sell one of his books in India because it has a page that seems to be objectionable to certain people from the Christian community. Why are there big fat double standards in terms of literary, creative and fictional freedom in India? Are we still living in the stone ages?

Ironically, we can see people shouting in the TV studios and writing shameless editorials about issues as trivial as someone falling on the stairs of river Ganga but they don’t have the moral temerity to highlight that literary independence in India is suffering from serious biases that need to be cured ASAP. However, let me remind my readers that no one will say anything. No one will speak because we are all too biased from inside and we keep waiting for the right moments to strike intellectually when our ‘ideological’ enemies are down. In such situations, unfortunately, true literary freedom is impossible.

by Amit Mishra for Literature News