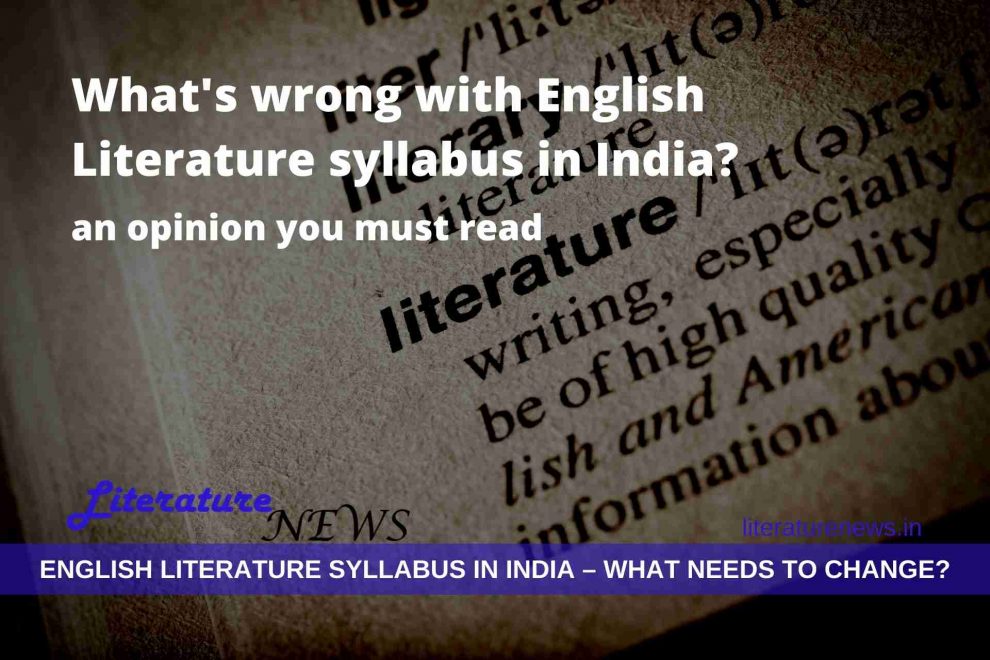 Indian universities are a wonderful place to get educated. Sorry, my apologies! Indian Universities are truly wonderful destinations to get highly educated. Moreover, if you are a student of English literature, you might have a lot to face in terms of challenges, activities, negotiations as well as inevitable robots who want to feed rigid and one-sided information inside your brain and later expect you to be creative, argumentative and also logical. Which is, to be frank, and being an experienced lab-rat I may say, impossible to a very large extent. English literature students in India develop their conscious reading Ecclesiastes in some states; in some states, it starts with the classics and, sadly enough, ends with books which are nothing better than cheaply-crafted propaganda – from either side. Well, there are more things to this mayhem that most of the universities in India created in the name of English literature syllabus. I will write about a few, the most important ones, in this article.

In MA, a university professor must expect you should have, at least, a basic knowledge of literary theory, supposing you are a student of English literature. What does it require? Your syllabus during graduation must have Literary Theory as a compulsory paper. However, Delhi University, one of India’s finest and nowhere in the world’s top 200, has pushed literary theory to the electives. Can it be better than that? I think no. Someone who doesn’t know the basics, the why, how and what of theory, cannot understand Barthes and Derrida with ease. But, DU has got it solved. They have put a basic introduction to the classical theories in the core course of MA syllabus and the advanced course into the elective slot. So, if you want to skip, you can! However, if you DARE to become an English literature professor, they will demand a needle-sharp dexterity from you in advanced, contemporary and even imaginary arts of literary theory. In short, you don’t have any use of whatever you learn unless you are taught the necessary and MUST-HAVE skills. And that is why most of the Indian students are compelled, without any chance, to look for English literature notes on various websites rather than preparing for themselves!

One thing that strikes the chords of uncertainty among students, in addition to many other problematic things which already exist, is the confusion on the very concept of English literature. For most of the universities in India, English literature originates in England and dies in a few countries that the Queen’s whim (in those days) had been suppressing. At times, you might see American and Australian English literature as well as the Middle East English literature on the desk. However, in the name of Indian English literature, you will find only the politically charged concepts like Dalit literature, feminist literature (minus feminine issues of importance) and a few well-known books in translations with the mythical Indian diaspora literature. However, when a student completes an MA and wants to explore the options for PhD, he or she is demanded to keep the topic very much ‘Indian’ because the literary world outside India might not give very much importance to their research on ‘original English literature’ and nobody may accept the authority of an Indian student on England’s literature as we cannot go to England to know the exact situations on the ground. Can we ask what the hell our academia has been doing all these years? Why couldn’t we establish our authority? Why couldn’t we rise above borrowing the literature as well as the interpretation?

Literature is often supposed to be creative. At the same time, it also offers liberty to those who are reading. Therefore, in theory, someone who reads a poem must have the liberty to craft his or her own interpretation of the work based on a logical flow of the ideas, from the first line to the last line. Nevertheless, in Indian universities, you have to stick to the normal. You cannot go beyond the thresholds that were set by our ‘English champions’ in England. In short, English literature in India has become as rigid as chemistry’s equations – H2O will be water; Shakespeare + Drama will always be the greatest, minus any chance of debates, discussions or otherwise suggesting logics. Why are the students even being taught if they cannot argue or raise their concerns?

There are many other political and cultural, as well as civilisational concerns, that may be discussed to prove that the situation is very alarming. However, for the immediate concerns, let’s talk about the use of a BA or an MA or both the degrees together. What can a BA in English literature do? Prepare for MA entrance examinations, in most of the cases. What can an MA in English literature do? Prepare for PhD entrance examinations, in most of the cases. The universities in India, mostly, do not associate any life-saving skills with these degrees. There are some universities that offer career-oriented add-ons, such as content writing, editing, creative writing and a few other papers. Nevertheless, the teaching methods and applicability of these add-ons are not beyond questions. Just remove a few exceptions and we will find a person out of college who knows that Shakespeare was the greatest dramatist; Paradise Lost is a beautifully written epic; Bacon was the greatest essayist; Victorian Era was the best age for Novels… why and how? NO ANSWER or the same repeating lines that we see in Daiches… what have we created?

It’s the time that Indian universities should look inwards and drastically change their English literature syllabus. It needs to be done. We cannot afford to create more and more limited-thinkers, thanks to the teaching methods like ‘the post says this and that,’ ‘the novelist wanted to give a message’. Define some new lines. Let students enjoy critical and creative freedom. Teach them to interpret, not the interpretation itself. And it’s the time that we must start looking beyond England and its sisters for content; we have too much in India if we ultimately end up forcing our students to conduct their research with Indian content and contexts. Prepare them to assert an Indian narrative rather than following the rigid patterns.

Events that inspire literature – tragedies or victories inspire the authors alike
Indian English novel vs Indian English poetry: why did one rise and another couldn’t catch pace?
Comment