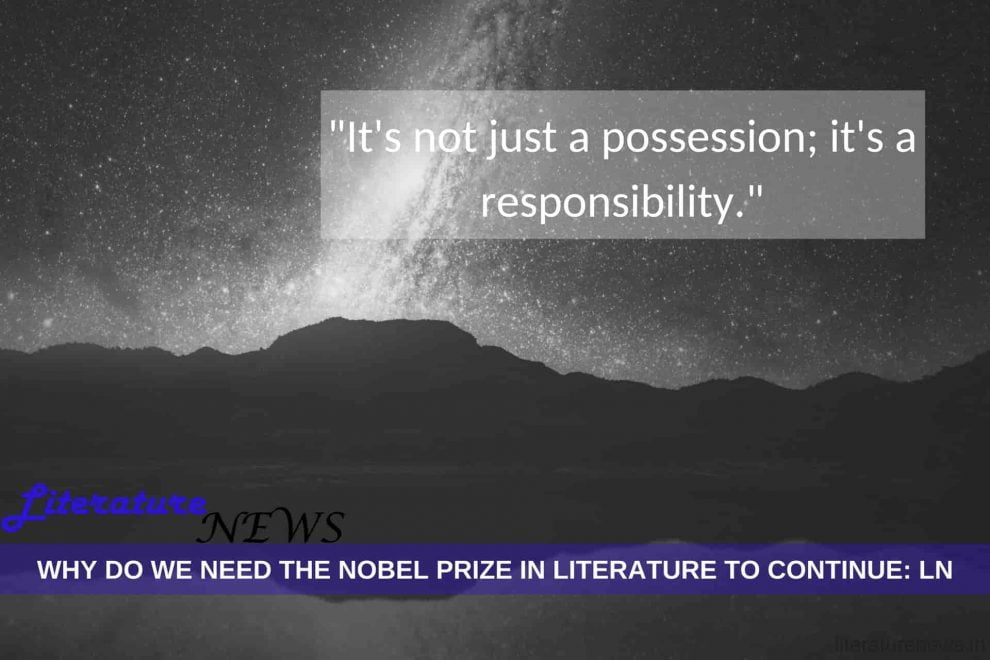 Looking beyond the Nobel ‘Prize’ in literature

Since the news came that this year won’t see any Nobel Prize winner in literature, there have been many opinions about it. Many scholars and many opinion makers are having their say and contributing their part to the build-up of a year in literature without Nobel. The basic question being asked in those articles (most of them) is what use the Nobel Prize has? How good or bad is it for the literary fraternity? Can we just be good even without the prize? Not just for a year but forever… can we manage that? Yes, we can! Scholars do agree on this as they go on making arguments and countering some of the arguments made by themselves (for the sake of it).

Well, as most of the articles have already let the readers know that the prestigious and much-coveted Nobel Prize in Literature is just about a badge of honour which no one cares seeing on another’s shoulder, let me dig the different side. Yes, there are controversies and there are the instances which might even prove that this award is more about propaganda than about recognising the literary talent; still, there are many usages of a prize as wonderful and popular as this one. And in the times when the modern world is facing a crisis of literary fiction, Nobel Prize is a MUST for the lovers of literature and also for the hopes of many literary fiction writers.

Before he won the Nobel Prize, Kazuo Ishiguro was already a Man Booker Awad Winning author. However, there were many among the masses who did not bother unless he won the award – once a Nobel Awardee, book readers came to realise that he is an author who can still provide solace to the readers with his constructive and meaningful fiction that multi-million-dollar books cannot!

It’s true that a Nobel Prize can bring overnight fame, money and exposure to any person who is conferred with it. Nevertheless, for the literature lovers, every year is a year when they get to know about authors who still produce literature worth-reading and worth appreciating. Therefore, even with this one reason, Nobel Prize is worth having rather than saying that ‘readers don’t care about the Nobel Prize’. That’s boorish or an argument.

Out of the very few who are well-known for producing quality literature in the contemporary club, there may hardly be an author who does not aspire to be the winner of this prestigious award. It gives them the motivation to keep doing what they do the best – even without the glamour and the sound of shutters of many DSLR cameras clicking together. The Nobel Prize is not just a possession, it’s a responsibility. The ones who get it (forget Bob Dylan) are always responsible about it and about their duties. Yes, many times, I accept, the claims can be made about many awardees who might not be the worthiest of the candidates on the shortlist. There is an ‘inter-department’ politics and that cannot be denied. Still, the only Global prize in the truest sense conferred on literary personalities is a necessity of today!

Let the Swedish Academy get rid of the problems and crisis that they are facing and then we can, once again, keep our alarms and calendars ready for the big event!