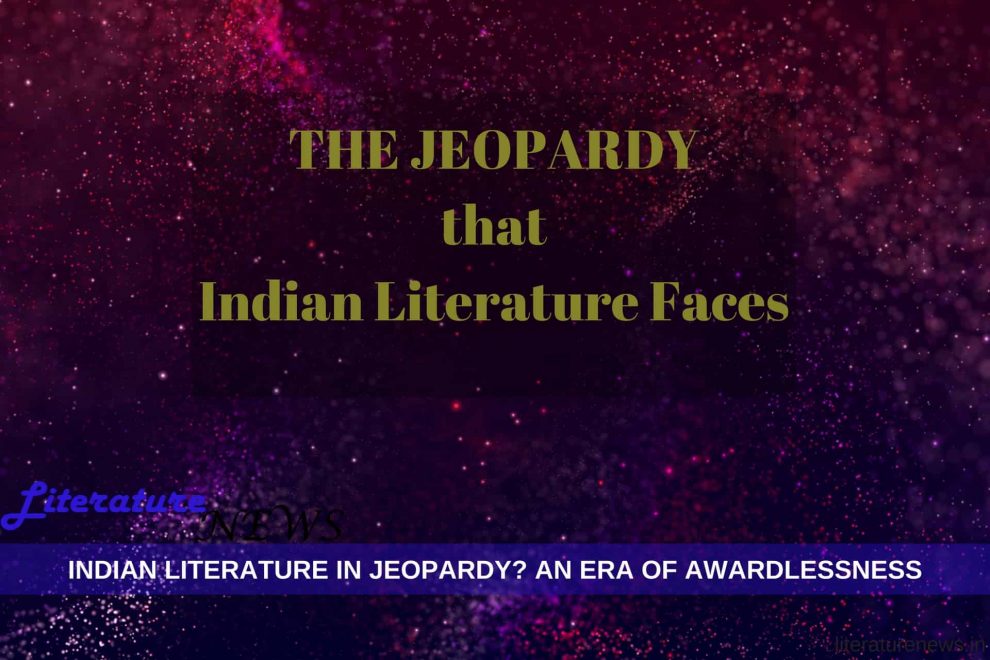 Is Indian Literature in some kind of jeopardy? This question might irk many people because they don’t want to see the warning signs and just keep continuing the fancy saga – we are the best; who cares for the rest; we are the best; ho ho ho! However, the reality is grim and if we don’t heed the signs, we are certainly going to inflict ugly blows on ourselves in the coming future. Literature is a soul of any good society and the soul must be objective, pure, unbiased and productive, creative and innovative at the same time. If it doesn’t happen, the life becomes plain, singular and boring. Indian Literature (taking only the English pieces because they mostly represent us globally) is going through a book – many people are writing; many more are publishing and some of them are also doing good – becoming bestsellers! So, what’s the problem? Where do I see the warning alarm ringing? Why I started with the question that Indian Literature might be in jeopardy?

Back in 1971, we Indians got our first representation on the stage of Man Booker Winners when V. S. Naipaul won the prize for his novel In a Free State. Is he an Indian in proper terms? Who cares! We will claim the award because his roots lie in India. After that, we had to wait another ten years when another Indian, Salman Rushdie, won the prize in the year 1981. However, after that, we sent him into an exile. We were being very tolerant to literature. And then, after sixteen long years, we Indians won it once again in the year 1997 when Arundhati Roy’s novel, The God of Small Things, was selected as the winner of the Man Booker Prize.

No, the saga doesn’t end here. We won it once more – in 2006, Kiran Desai’s novel, The Inheritance of Loss brought the prize to India (did she?). In fact, we won it once more, in quick alternate succession, in 2008 – The White Tiger by Arvind Adiga. And after that, we have been sleeping for these 10 years. Ironically, these 10 years have seen a great surge in the number of authors publishing their work; a number of publishers setting-up their presses and number of readers buying the book. However, among so many who write and so many who read, aren’t we capable of producing something which has the capacity and charm to represent us on the global stages set for literature? How long will we be relying on our past?

People will talk about shortlists, the recognition, the media buzz and all that ‘crap’ which tries to justify the supposed ‘progress’ of Indian Literature. I don’t buy any of those. People might also talk about the bias in award-conferring committees and so on; I don’t take them seriously either. Let’s think actively – not passively. What’s the quality that we have been producing? With the focus on getting published and making a name for oneself as an author, the new generation of authors is just following the race of people who are just being authors. Their contracted and myopic vision does not see anything beyond pleasing the readers – they don’t pay any attention to making the readers thing – not only nationally but globally. Certainly, no one can deny the attempts made in between. Amitav Ghosh is a classic example. He makes the readers think; however, his readership is rarely outside the academic or the intellectual zone. Thayil – he isn’t even known by the readers who claim to be serious, regular and critical readers of Indian fiction in English. I cannot blame the readers; I cannot blame the authors as well. However, I will certainly blame the ‘eco-system’ for this. The students, in the academic circles, are kept in the past. The committee which decides the books certainly does not do a bit to recognise the contemporary talents who can be potential representatives of Indian Literature given the opportunity and the recognition that they deserve.

Let’s create an atmosphere which appreciates the efforts made in the directions of productive, meaningful and creative literature. We cannot keep messing our heads with ‘friendly literature’ being produced by ‘friendly authors’ and then blaming the serious writers that they don’t bring awards to India. We have to give them the support and fame – if we seriously want to bring Indian Literature out of the certain jeopardy of awardlessness and lack international ‘standard’ recognition.

by Amit Mishra for LN