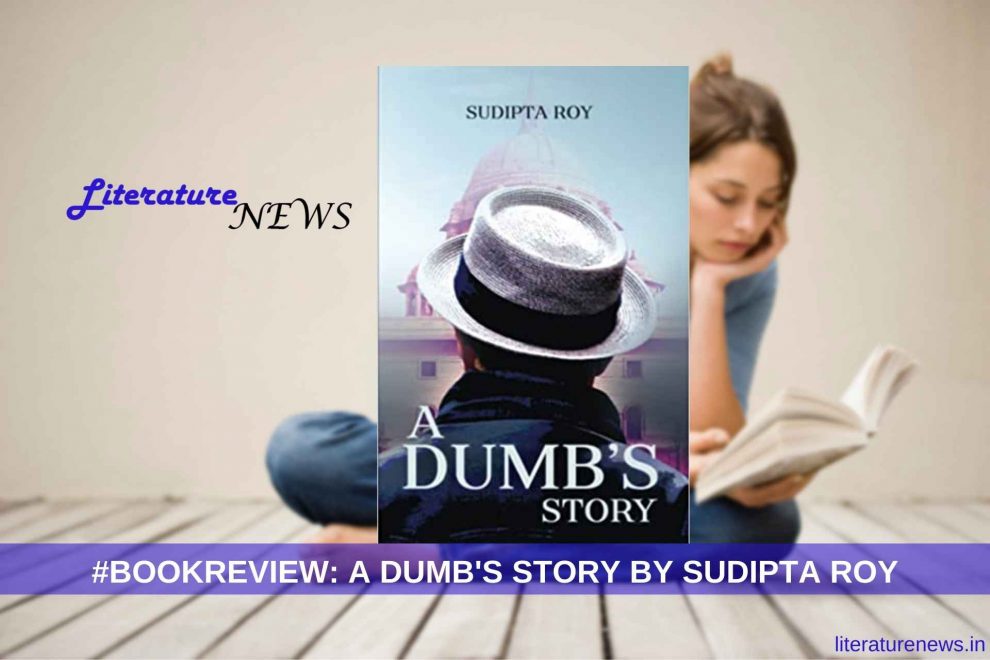 Life without voice is like you are stuck in a traffic jam, of your own thoughts, ideas, needs, emotions, and finding it difficult to express them clearly. If you live your life talking fluently – sharing happiness with loved ones, gossip with friends, or even participating in debates or giving business presentations– it can be hard to imagine. Well, I am talking about the very premise of a novel written by a modern Indian novelist, Sudipta Roy. The title of the novel is a little too detailed but matches the description stated above – A Dumb’s Story: A silent rattle that rips the rug of raunchy!

Well, just thinking of putting oneself in the shoes of Nairit, the protagonist, one can try to understand how the life of a person who goes dumb after half of it might look like. When you’re dumb, you experience life in different ways. You communicate either through signs or by typing messages on the mobile phone. For debate or delivering the presentation, you need a translator (or maybe a person who can also fuse passions and emotions with your messages). Formally, emotions are expressed through body language. But, apart from these, the outside world is really difficult for a dumb person to strive and thrive.

The Dumb’s Story by Sudipta Roy portrays the life of a dumb guy, Nairit and his struggles to deal with the world that is always shouting.

The story of the book revolves around Naririt primarily. He wasn’t dumb since birth. Rather, he was an extrovert who loved to talk, express his ideas without any fear and debate to prove his points. This attitude brought him success and he became a successful engineer. When he’s at peak of his career, in a fatal incident he lost his ability to speak. To be frank, the guy smoked a lot, consumed too much alcohol and ignored the early signs (or thoughts) of tongue cancer. With his voice, all his hopes and dreams too were shattered. He’s was in the hospital for months. His diary was his only companion. Through his diary, we, the readers, are made to travel in the past to understand how a talkative person ended up being dumb, how a successful corporate employee ended up working for people in the slum area, how a VP or potential CEO of any startup in Bangalore ended up having passions for being a politician.

At the very core of A Dumb’s Story, we find the story of a person who is not afraid to take challenges, execute them, walk the talk, and stay firm even in difficult situations. Even after losing his voice, Nairit didn’t give up. He fought with all the odds and made a team of people who understood the importance of public service. Bayu, his friend since childhood, supports and accompanies him in his plans and ideas (and even in the hospital). There are many things that transpired between Nairit being diagnosed with cancer in his tongue that made him dumb and his ending up in the parliament of the country. Well, let me tell you that the story is interesting, full of details that one might like reading and a little, just a little far from reality so that you can understand it’s fiction and yet connect with the story because it’s not too far-fetched either. How did he join politics? What all struggles had he gone through? Who all were his supporters in his voiceless journey? To know the answers to these questions, you have to read this book.

Apart from this, Sudipta’s book also brings forth some real issues that modern society is facing. Like, changing equation of parents and children especially after children locating to some other place for their job or education; the inclination of young generation towards the betterment of the society they are living in; the role of startup business in villages to slowly eradicate poverty; political frustration with which almost everyone is going through. And trust me, even being a fictional tale, the author has very well accommodated these issues in the storyline.

At the core of this wonderful storyline lies its compelling characters. As such the story has limited characters. However, each of them is developed with a higher sense of individuality and has been fused with a zeal to do so something. Readers will certainly appreciate this. Sudipta Roy has given the emphasis on the central character as well as other characters around him. Indeed, Nairit is the protagonist and his character is truly inspiring, all the other characters are equally important and motivating. The author’s characterization ability is commendable. You will like Bayu, Neer, Nri and even the antagonists like Choritroban.

One more thing that I would like to bring in front of everything is the quality of the novel also lies in its rich usage of symbolism. The novel begins with a Sanskrit description of Nairit. It has the names of places, villages, characters all referring to symbols and you can drive to your own conclusions, ideas and interpretations. For instance, take the name of the place that Nairit wants to reform, Mrityunjay and the land shark who has decided to make the lives of people hell, Charitroban – a man full of character! Ah!

Sudipta has been very simple in his explanation of the events. Very subtle and attractive in assigning symbolism, irony and suggestions to his characters, descriptions and names of anything or any person. At no point do you, as a beginner, get distracted because of simple English, a clean narrative and a traditional storytelling methodology. However, a mixture of the first and third-person narratives may create some degree of confusion for the readers who will take more than enough time to get along with the storyline.

To conclude, I will rank the novel a place above contemporary novels that I have read by too enthusiastic authors, romance fiction and contemporary thriller fiction. While modern Indian novelists and authors are recreating the same story time and again, Sudipta Roy has thought of something more, something uncommon and something that tells the readers – life is uncertain but it does not stop you from doing what you want, what you can and what you should! Do get a copy and read this wonderful novel. Though you might not agree with everything that Nairit does in the course of his passionate drive to change, you will connect with most of his actions.

You can get a copy from Amazon India by clicking the link below:

Review by Parakashtha for Literature News

A Dumb’s Story: A silent rattle that rips the rug of raunchy! by Sudipta Roy – book review

A Dumb’s Story: A silent rattle that rips the rug of raunchy! by Sudipta Roy is a contemporary novel that makes you think, think twice and ponder over the issues dealt with, the story told…