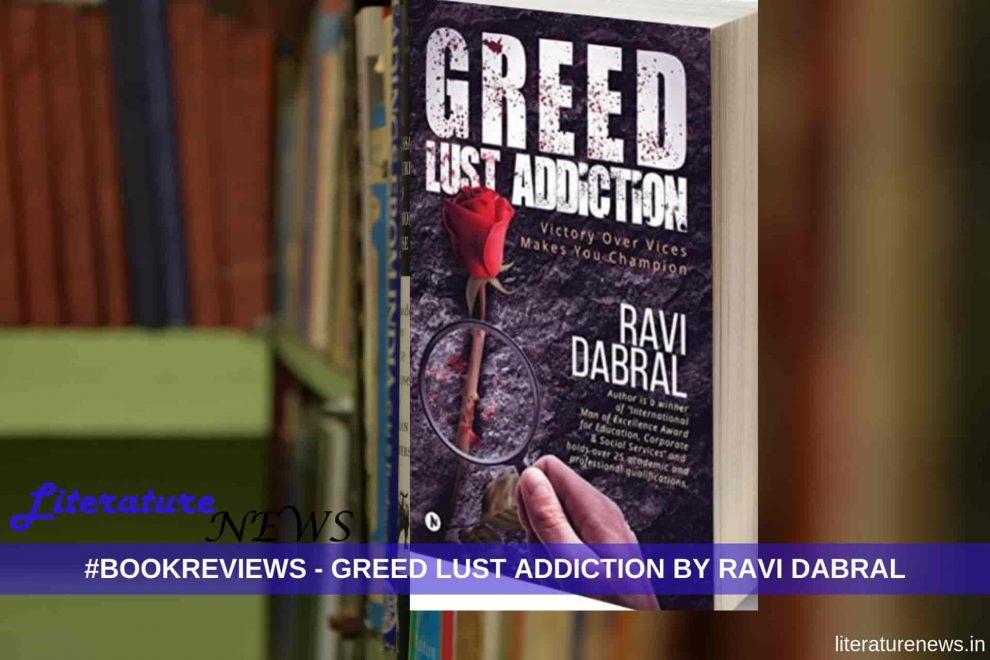 I have recently finished Ravi Dabral’s debut novel Greed Lust Addiction, a kind of bridge fiction that offers plenty to the current generation of readers as well as to the previous generation of serious fiction readers. Featuring Suraj as an embodiment of sensible, satisfied and spiritual person, the novel aims to create a contrast – materialism versus spiritualism and also a balance between the two that might be just well for life. The characters that play a major role in this novel are Suraj, Vijay, Sima, Priya and Guruji is the character around whom these four characters are present most of the times, figuratively or physically.

Plot:
There is Vijay we find when the novel opens. He becomes a police inspector after paying a heavy amount as bribe to the elected politician from his locality. We get to know about Suraj, his elder brother. There are other characters who miss Suraj, his mother and his wife along with Suraj’s son. Sima is introduced as Vijay’s girlfriend.

The readers are told that Suraj has died in a car accident but reading Suraj’s diary, Vijay comes to a conclusion that Suraj might have been killed by the politicians who were caught in a sting that Suraj did on the corruption and scam issues. Suraj was an investigative journalist working for a TV channel. This thinking by Vijay takes the novel into another scenario and we are introduced to Guruji, Suraj’s spiritual guide. Many people are shocked to know that Suraj is actually alive and he has changed his appearance as a Swami, known as Swamiji and has been working on his underground mission to know the deep-rooted corruption. Now on, all these people are together trying to fight against the evil forces in the society through democratic means – politics, judiciary and law.

Theme:
Spiritualism is the guiding force in this novel. The novelist, Ravi Dabral, has written about Yoga, Mantras, spiritual practices and many other things that are not generally found in a fiction written by modern authors. Corruption and fight against it are also the elements very much present in the novel.

Verdict:
While I liked the plot and appreciate the theme, I would have happier seeing the language and narrative a little more brushed and standard. In the current form, although, the novel is accessible and readable by most of the readers, a standard language might have taken it to a different level altogether! However, whatever it is, Greed Lust Addiction is certainly a novel to enjoy! It has the things that keep the readers indulged with the progress of the novel as well as indulged with another dimension of the narrative – the hidden and implicit layer.

Ravi Dabral’s attempt is very much appreciable and he has a long way to go! I am sure more of his works will be there to be read by the fiction lovers in India in the coming days. Let’s hope this serious journey in Indian fiction goes a long way and we have more like this one…

review by Abhishek for Literature News

Narrative – Could have been better