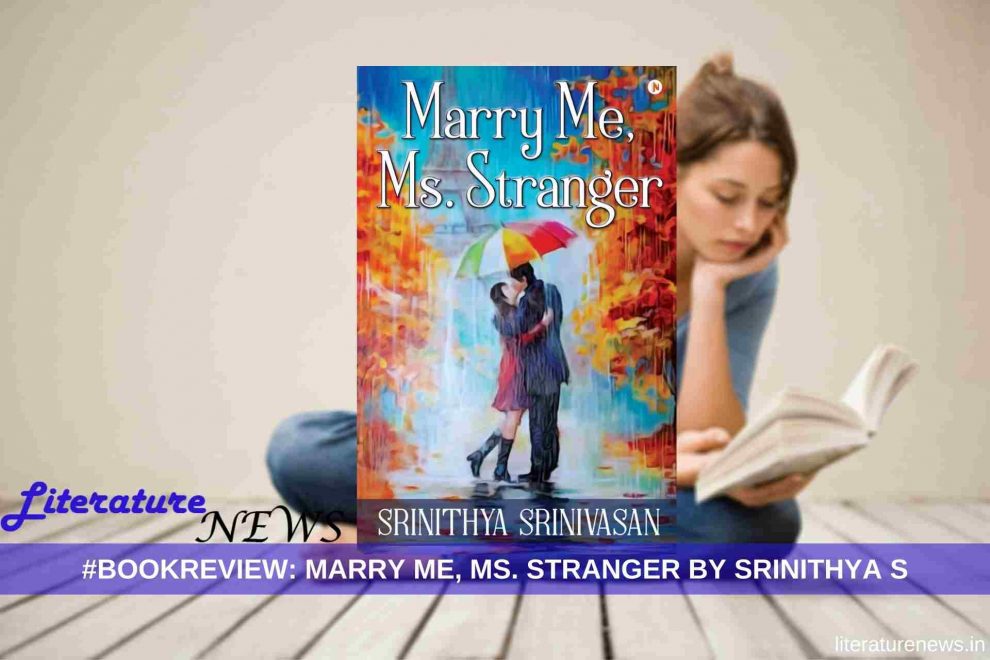 All those who want to end this year with a positive note, smiles, laughter and something to remember for some time (yes, I am talking to readers) can get a copy of Srinithya’s debut novel, Marry Me, Ms. Stranger. Well, this might sound like a person selling something passionately. However, it’s not the case. I am recommending a book because I think it offers the readers many things that they will enjoy reading, consider thinking and remember. So, without doing any more mind games, let me get straight to the novel itself and you will understand the reasons behind a recommendation right at the top itself, and this is certainly unusual for reviews on Literature News.

First of all, Marry Me, Ms. Stranger, is a multi-faceted novel with the comedy of conscious as a constant presence throughout the novel. There are comic elements, incidents and conversations; however, most of these things are not there as unmatched, forcefully stuffed decorations to make a room look more arranged. Srinithya Srinivasan’s comedy makes sense because it offers you an opportunity to look beyond the laughter or glimmer that you apparently witness. The novel is about a marriage that should ideally take place. However, the marriage is delayed because the couple to be married thinks it better to know each other before it happens – meet Aman and Janani, the protagonists as well as antagonists in the novel. The storyline offers critical comments on marriage, parenting, love, attraction, modern life and many more things. Language is simple and sometimes dull as well. However, the theme seems wider than it seems at the beginning of the novel. The plot does have a few emotional turns but it does not offer something extraordinary that might give your head a strain. A cool novel with an average speed and realistic story with a sensible theme and some quality writing in patches – a perfect recipe that makes a contemporary piece of fiction many things more than a novel that you usually read these days.

Who should read it?

I might be called a sexist (really?) if I say that women will love reading it? Well, I have my reasons behind this thought. The novel has been written by a woman novelist. The novel has a woman protagonist who takes charge. A bold, modern, progressive and self-dependent (financially) woman named Janani who does not find it comfortable marrying a stranger who happens to be some richest man in Asia. Janani is a free-thinking lady who prefers trust and respect for the partner in a person before his wealth and fortune. And that’s why women would love reading this one… and Janani is the narrator of the novel as well. However, anyone who loves reading women-centric novels (including men as well) will certainly appreciate the theme and set-up of this one. Light, comic, marriage at the centre and a simplified narrative – won’t you love offering such work to yourself?

What can you expect as ‘cons’ in this work?

Well, it is certainly true that every coin has two sides unless the coin has both the sides identical. A few would have remembered the scene from movie Sholay as well. However, this novel does have a few things that I should point out, as a critical reader and book reviewer. You might feel, first of all, that this novel might have been protracted a little more than its stretch. It might feel a little longer than it should have been. The second thing that might be experienced by the readers is the self-realisation or monologues or those words that Janani says to herself rather than uttering the dialogues that the author has written… it might or might not bother the readers depending upon the personal preferences. Another one, and the last as well, might be the fact that Marry Me, Ms. Stranger, is a little ‘less’ romantic that a few readers might expect it to be. 🙂

I think this is a novel worthy of being read… you should read it to make your own, final, perceptions because it does deserve your attention if you find yourself fitting the descriptions detailed above. Sentimental at times, comic most of the times and emotional as well… the novel moves mainly with both the protagonists at the centre and yet it does not become a singular show. So, there are colours. I am sure that the readers will be impressed by the quality of the issues raised and some pinching remarks that are found in the course of the story’s progress. You can get a copy for yourself from Amazon India website right now… click on the link below:

Review by Anand for Literature News

Srinithya’s writing has certainly been impressive… in large patches. A good one to spend the year-end because it is a little longer than the average pieces in contemporary Indian English fiction. All the best!