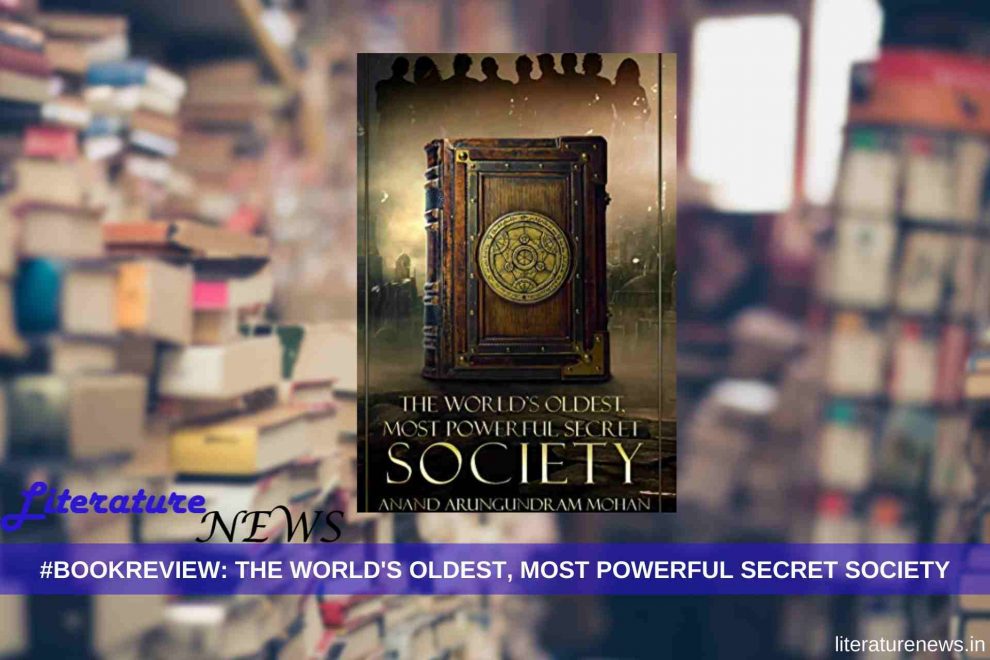 Published by: 2AM Can-Indian Publisher

I haven’t come across many books that are as eloquently imagined as Anand’s The World’s Oldest, Most Powerful Secret Society. This novel begins in the middle of a battlefield and ends on a note that you might not believe so easily. However, in the middle of this drastic change of scenes, you won’t find anything that is not smooth. The narrative is fully co-operative with the authors and transitions between the scenes and events and even centuries are comfortable. The novelist, Anand Arungundram Mohan, has employed a technique that’s very close to magic realism. He has ascribed magical powers to a book that can change the course of the world.

The novel begins at the battlefield of Kalinga where King Ashoka changes his mind after seeing devastation all around. He forms a secret society of 9 people and tells them to collect ideas, research, science and technology that could make some great things happen. Time travelling, communicating with aliens, flying humans and flying vehicles powered by anti-gravity powers… and many others. The episode breaks after a while and we are taken to the present time. 9 Children are born the same day in India, Hyderabad. Remarkably, there are having 1 minute of difference in their birth times! With a bond so strong, these children grow up together and create a group that Leela names The Nifty Nine.

Some tragic episode on a cricket ground takes the life of Gopal and everyone becomes sad. Leela, who likes Gopal more than anyone else, proposes an idea to bring him back from the dead with the help of a book that some old man suggested her in the hospital. There and then, the quest to power begins. These guys, somehow, crack the code and get their hands on the book. What will happen? Will they get the friend back from the dead? What else can the Book of Power do? Can it really help the kids fly and time travel?

The scenes in the novel are drawn very cunningly and the readers are compelled to impress themselves by the awe-inspiring narration of the events. Anand Arungundram Mohan has not left more space to be called out for his storyline and overall impression. He has kept the language at a standard level that will do okay with kids as well as adults. However, the characters are plenty but the focus remains on 3-4 of them all the time. So, it could have been sorted to make the novel more realistic and participatory in terms of character-plot ratio.

There are many items in the novel that could be seen to bring the critical readers’ attention to a very popular term these days – Indianness in Indian English literature. Moreover, the employment of this theme and the very idea gives us a hint that the novelist is on the path that idealises Ashwin Sanghi. Magic Realism plays its part and the readers will have to be impressed by the dexterity with which Anand has executed everything in the novel. It makes a good read for teenagers, young adults and also adults who have read more than enough. This is a time for a change and you can shift to this fast-moving novel for better.

I would keep my ratings for this novel gracious enough and I don’t see any problems, or at least problems in a ratio that I will need to draw their pattern in this review. I am giving it a thumbs up! Go ahead and get your copy from Kindle and read it. Nevertheless, you might get lost at times if you are not careful. Remember the links as you further into the story. All the best!

You can get a copy of the novel from Amazon India by clicking the link below:

Buy the novel – click here to buy from Amazon

The World’s Oldest, Most Powerful Secret Society by Anand Arungundram Mohan is a fantasy novel that traces the mission of 8 children who are on the way to bring their dead friend Gopal back… can it happen? You will enjoy the novel all the way.