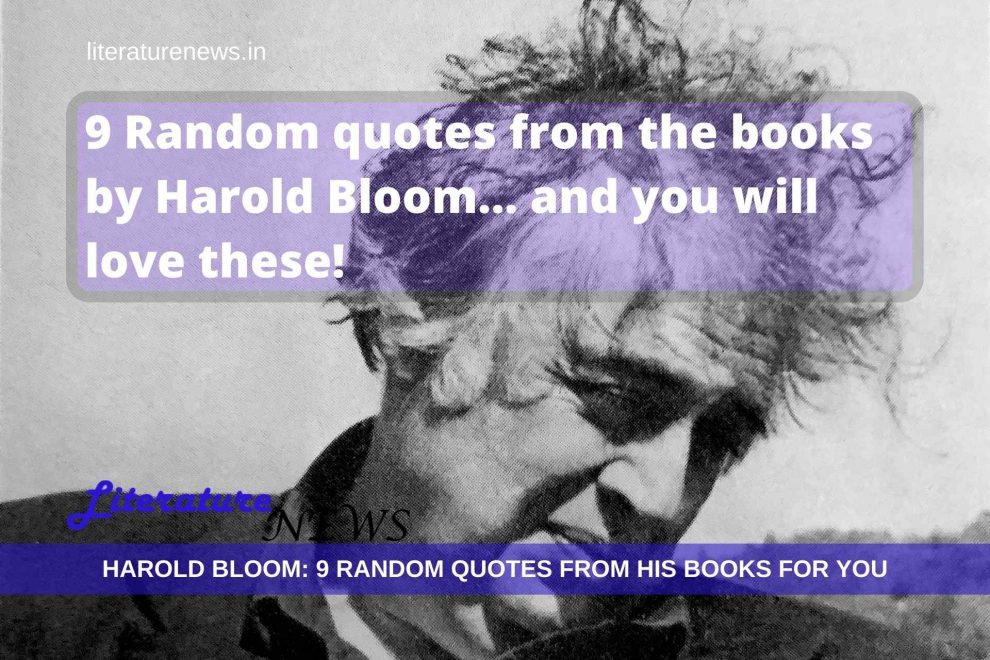 The prowess of Harold Bloom’s critical genius is famous and we all know it. Without a doubt, he is a critic who is read widely by students and teachers of literature seeking astute observations on literary figures and their works. In this article, we are offering 9 randomly selected quotes from his books. We are sure that you will not only like what we put next but also get inspired to inquire further. Keep reading!

Number one:
“A poetic “text,” as I interpret it, is not a gathering of signs on a page, but is a psychic battlefield upon which authentic forces struggle f(n the only victory worth winning, the divinating triumph over oblivion…”
From Poetry and Repression (1976)

In this extract quoted above, Bloom invests his thoughts in a question raised by Derrida and also extended by himself. If you read the book, you will find mentions of many poets and their poetic abilities with their version or understanding of what poetry might be. Do read Bloom’s views.

Number two:
“Whitman was self-published, as Blake was, while Dickinson and Hopkins were brought out posthumously.”
From How to Read and Why (2000)

In this extract, Bloom reveals what most of us don’t know already. He, further, laments the decline in readership of poetry and also conjectures on the future of the novel (at that time). If you read the book, you will understand the vision of Bloom about what to read and why to read, as the title suggests.

Number three:
Milton, very much in the spirit of the Hebrew Bible, seems to have understood implicitly that angels were not a Jewish invention but rather returned from Babylon with the Jews. Angels, ultimately Zoroastrian, emerge from a vision that sees all reality as an incessant war of good and evil. Shakespeare’s vision, far subtler, sees each of us as her or his own worst enemy, for reasons having little or nothing to do with good and evil.
From Fallen Angels (2007)

Does it demand a further explanation? In the extract quoted above, and further and before this, the author argues about the role of angels and description of the same in literature by various authors – especially Shakespeare and Milton. The book will be interesting for those who believe in angels. Do read the introduction part of this book carefully if you begin to read it.

Number four:
“Of course, whoever you may be, you can be loved and loving, and still demand more.”
From Tanner Lectures on Human Values (1997)

The author is explaining the character of King Lear and also relating it to the general character of human beings in general. The book is full of such observations and readers will relate to many of these.

Number five:
“We live increasingly in a time where soft-headed descriptions of anxiety are marketable, and cheerfully consumed.”
From Anxiety of Influence (1997)

Well, the extract may be true for our times, in the 21st-century, as well. We are living in a world where anxiety, depression and many other negative vibes are sold unabashedly and we are the ones consuming and cheering… without much thought. However, the book in which the above-said line occurs, Anxiety of Influence, will be a valuable addition to the library of anyone who wants to understand English romantic poetry (mainly, more than poetry in general).

Number six:
“Our confusions about canonical standards for genius are now institutionalized confusions, so that all judgments as to the distinction between talent and genius are at the mercy of the media, and obey cultural politics and its vagaries.”
From Genius (2002)

How true are these words today? How many things are at the mercy of media and opinion-makers today? It could not be said in any better manner than the one used. However, the book, Genius, is a useful book for those who want to understand the works by many greats from different perspectives.

Number seven:
“Freedom, in a poem, must mean freedom of meaning, the freedom to have a meaning of one’s own.”
From Deconstruction and Criticism (1979)

This is a very important extract. The book is one very important work, if not a landmark, that should have guided many scholars and students in the direction of criticism, form, poetry and deconstruction. This is something that many have been arguing for in terms of freedom to choose what interpretation they would like. However, as many others would suggest, freedom to interpret may end with a lack of discipline. To further get into the arbitration, you can read this book with chapters by Bloom, Paul De Man, Derrida and others.

Number eight:
“A poem is neither thought nor personality; it does not affirm anything, not even the poet himself. A poem grows out of consciousness as naturally as leaves come to a tree. The poem transcends nature, and yet is a natural outgrowth from nature.”
From A Visionary Company (1961)

In the chapter on Keats, Harold Bloom enjoys his liberal fancy and goes on to describe what a poem might be and how it occurs. The readers, who understand what poetry can do, will surely relish these lines and especially with a reference to John Keats, the dearest of romantic imagination that knew no bounds of truth or limitations general human minds surmise. Did you enjoy reading this?

Number 9:
“T. S. Eliot, a minor critic compared to Johnson, became a strong poet by revising Tennyson and Whitman in The Waste Land.”
From Western Canon (1994)

Well, this is something that shows a very discerning side of the charismatic critical faculty of Harold Bloom. Though he also bashes Dr Johnson in the same chapter, he uses his prowess to attack T. S. Eliot calling him a ‘minor critic’ compared to Dr Johnson and he distinguishes some follies of Dr Johnson in the same breath. What does it imply (or rather states)? You need to decide for yourself.

In the end, believing that these quotes will be helpful in understanding the mightily critical thinking of Harold Bloom, we ask for your opinions on the words in the comments section. Do let us know which one you liked the most out of the nine we mentioned here.

Yes, novelists can give blockbuster movies – and Tom Clancy has done many!
Sharat Sharma’s unique approach to self-help genre reflects well in The One Invisible Code
Comment