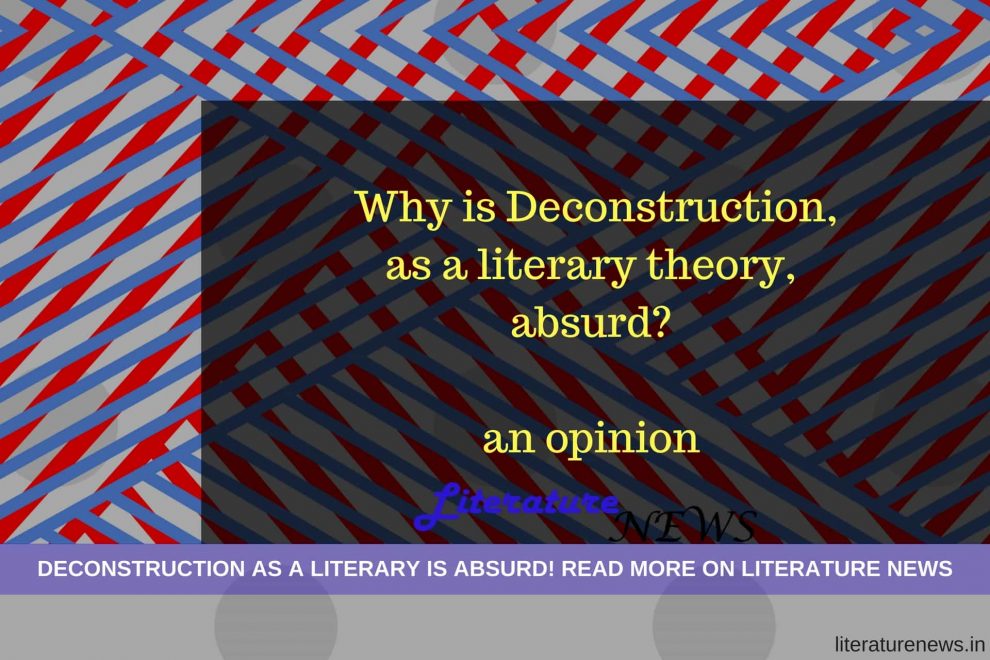 Is Deconstruction even valid? Has the theory of Deconstruction got something outside the frontiers of its dimension? I am trying to keep the theory within its literary ramifications, which, I am sure Derrida did not think when he presented the paper many years ago. When poetry or a novel is constructed, the author or the poet thinks of various ways to add fiction in a proper proportion to the truth that he supposes to be true; and thus, a work of literary art is born. If that is done really well, we enjoy that and appreciate and recommend. And otherwise is otherwise with some fiery criticism at times. All other theories, somehow, uphold the creativity and the efforts of literary artists are acknowledged. Deconstruction, on the other hand, is so bogus that on a whim to prove the artist wrong, it not only kills the soul of the art but also declares that superficial and unworthy. And that must be the reason why people beyond the academic boundaries don’t bother much about this supposed theory.

Thinking beyond the thoughts of the characters and supposing what one might have supposed during the creation of the art or what someone within that art might have supposed or thought or implied… doesn’t it sound a little dubious? If not dubious, then certainly, a little like the oracles who know everything and every time and that’s right. Within the philosophical tenets, one might argue and vouch for the theory of deconstruction but it certainly fails (not itself) if we try on the literary texts. And it becomes even absurd than the theories before it because it certainly bases itself on the imagination, largely.

Most of the critics, until now, have not been on the same page when it comes to defining Deconstruction as a literary theory. The phrases like ‘reading against the grain,’ ‘finding binary oppositions,’ ‘looking for the loopholes,’ ‘finding the internal contradictions,’ ‘paradox,’ and many others often emerge when we sit to discuss this concept (should I say it theory anymore?). What is ‘grain’ of a poem or a novel? Yes, there might be paradoxes and contradictions in the text or a literary art, and that is, I am sure you will agree, for the purposes other than misleading the readers as the theorists advocating for Deconstruction suggest. Let’s discuss a simple example:

Deconstruction is a theory which is based on the illusion of thoughts and fallacy of functions. It lacks the concrete foundation on which the arguments should be made. The critic who applies Deconstructive method on a literary or any other text is doing nothing but assuming what might happen if it did not happen like this and many other questions with if and but. Well, don’t tell me that a theory other than the theory of doubts (for that matter, Science as well) works on ifs and buts.

In short and simple terms, Deconstruction has nothing to do with the literary text. It looks to satisfy the needs of questioning the structure and for that, they (Deconstructionists) will construct the questions and answer them as per their agenda. The outcome – John Keats did not know how to use language; Shakespeare was either mad or confused; Blake was a racist; literature is superficial and absurd!

Charles Dickens & His Fiction – a paradoxical wave of opinions
Romance, women and Literature – then and now
Comment