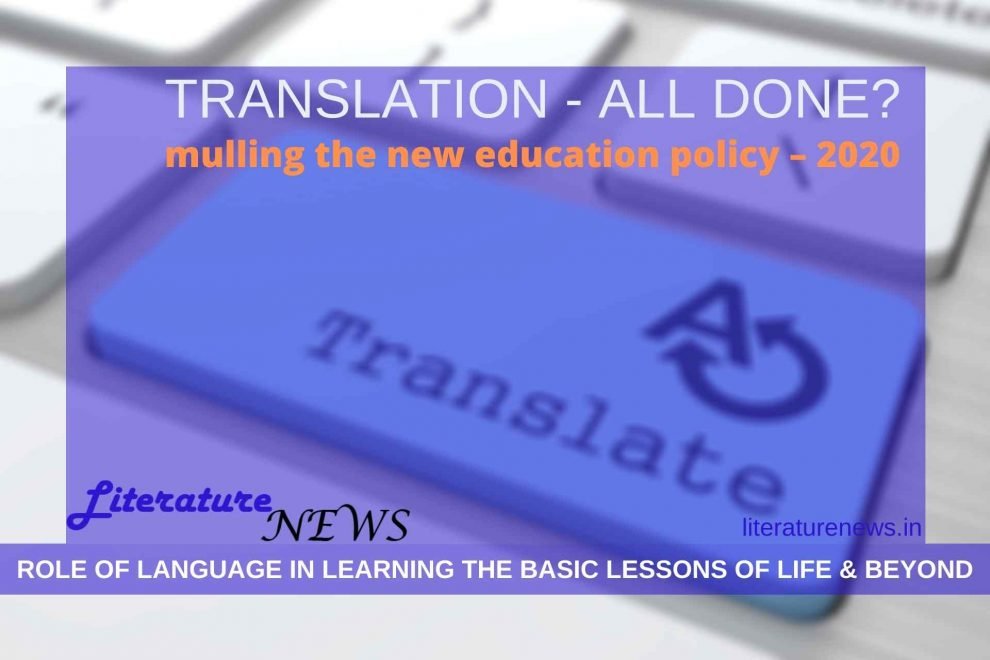 Translation has made life easy. I can go to Assam. I can go to Kerala. I can even go to Mexico. I have English. Barring a few countries who have done extremely well in celebrating and keeping the love for their mother tongue intact in their population, English is the key to social mingling in the world. However, have you ever thought whether our emotions can be translated into a different language? I mean whatever you think should come into your mind in the native language, the language in which you have grown up (if you can actually understand what I want to say here). Now, if you want to translate that into a language in which you want to communicate to your counterpart (the audience or the friend or the stranger in front of you), will that be natural? As raw and as original as that is natively in your mind. Have you reflected on this aspect?

The recent announcement of New Education Policy, 2019-20, has stirred a series of conversations in the academic world. Educationists (the ones who have recently turned into this profession leaving their old avatars of Indo-China experts as well), students, teachers, professors, housewives, fathers, illiterates, farmers, cricketers and everyone, in short – the country is indulged in discussing this new education policy. A very important aspect has been dealt with in this new policy and it should be highlighted before things get outshined by the politics that might surpass the actual substance. The decision that students will have the opportunity to study the elementary classes in their native language is actually commendable and there must not be any trouble with this because science also believes that human beings are capable of perceiving and learning things in their natural language in a better speed compared to what is done when you have to translate things into your native language – adding an extra layer which always makes the transaction delayed and clumsy.

To enhance the speed with which a child can develop the basic sense of the world around him or her, it is truly essential that we give the basic and the necessary knowledge in the very language that the child has been accustomed to growing up and understanding things at the home. Yes, the counter-argument might suggest that children are very quick learners and they can digest almost anything. However, why waste this important time in making their lives difficult with only languages? A child has too much time to learn languages after class five as well. Up to class 5th, let them study the basic and essential things which will pave the way to deciding what should be learnt the rest of the life.

When we translate ‘things’ into different languages other than the one which has been used to ‘think’, we always lose certain emotions and ideas. You cannot say that you understand a line of a poem the same way in Hindi as you understand the same line in English when the poem is translated and it stands true when you reverse the order or you replace the original and the target languages with others. For a quick, practical example, let me share this with you:

These lines have been taken from a poem entitled Hindu Tan Man, Hindu Jivan by respected Atal Bihari Vajpayee, a wonderful Hindi poet and the former PM of India. You must have noticed the immense cultural, religious, linguistic and sentimental packaging that these lines form. However, an English translation, the best possible one right now possible, might render these lines into something like:

I am the fire of Shiva that can turn the world into ashes;
I am the destruction sound of the pellet drum that contains massive violence;
I am the thirst not quenched of the goddess of war, I am the frightening roar of Durga;
I am the horrifying howl of Yama and the fiery air of cremation ground.

Anyone who can understand Hindi, as well as English, can easily see what I am trying to convey. Alok Mishra, a poet, an author and also the founder of English Literature Education, a platform that provides free English literature notes to students and academically involved people, who is doing his PhD research on Indianness in Indian English poetry, puts it this way:

“Language has a key role to play not only in poetry or any other form of literary communication between the creator and his audience. Language is immense. A language contains consciousness, cultural milieu, social fabric, religious sentiments, civilisational evolution and what not! Yes, you can translate the language and the surface meaning; however, you cannot translate the ideas and the emotions along with all the elements involved in the original thinking that only a ‘native’ language of the thinker can convey. This [new] education policy by the current Indian government will certainly prove to be a landmark because it has put the onus of basic and the most essential education on the native language of the students. You will see the impacts, visible enough, apparently, in the coming years.”

There are different bundles in which we can discuss various elements involved when we talk about translation. However, for the moment, this is what I had to out in front of our readers. And I am sure it must have done something in order to let you know why the education reforms, in the form of new education policy introduced recently, August 2020, was necessary as far as the role of language is concerned.

An article by a contributor to Literature News

Wikipedia is damaging culture, knowledge, intellect and free speech – time to shut it down? Opinion
The problems of the Indian Diaspora literature – an opinion
Comment