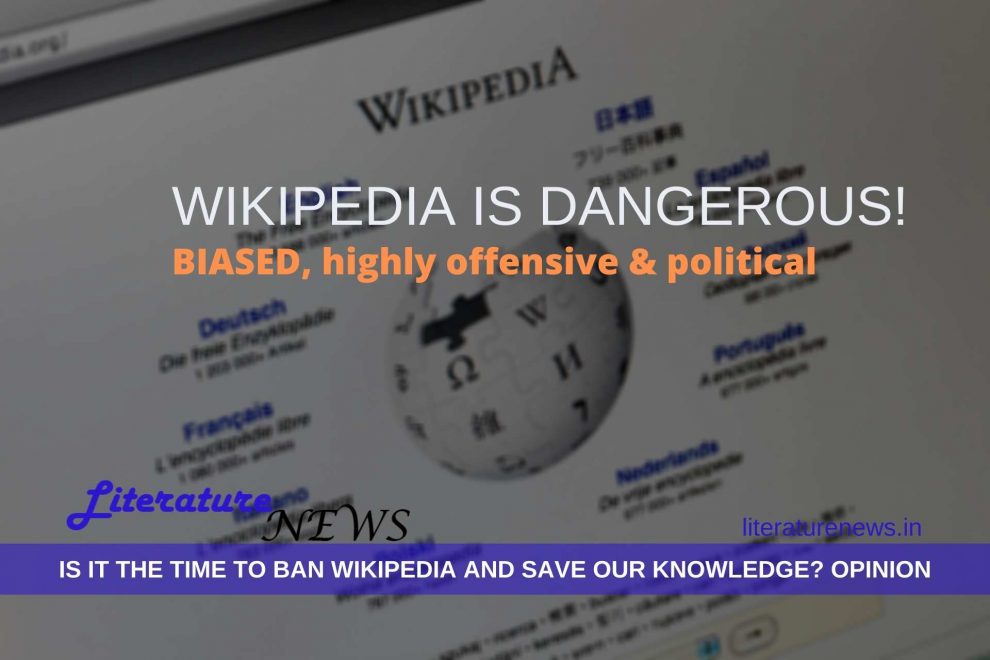 Wikipedia, over the years, has been the first-choice source for information on various (almost any) subjects and people have loved it for the ease of reading, organised presentation and also being a public platform. Children, especially, have made themselves dependent on this platform for their knowledge, academic works, classroom education and they, more than often, perceive the information presented on Wikipedia to be authentic, last word and reliable input. And here, being a public platform, Wiki becomes hazardous, partisan and a massively armed enemy for the generations to come. What’s there that a website can do? If you also have this question in mind, you need to read this article very carefully.

Wikipedia is not authentic: If you think that Wikipedia is the last word on any subject, person, issue or controversy, then you are highly misled! This is not the case. Wikipedia is a highly manipulative platform where you can offer ‘credible’ references to extend your opinion on any subject. For example, Wikipedia is so naive that it can believe an opinion article written for a newspaper to be authentic and credible enough to be mentioned in a subject but it does not believe in the literature that has survived more than 10-thousand-years. Can you believe that? Yes, if you think that Wikipedia has editors for hire who can create almost anything with or without credible references, you are right. 70% of Wikipedia articles are written in an exchange for money. The editors, in most of the cases and unlike Encyclopedia or any book on a particular topic, are not experts on the topic they write – they are merely writing what they read in newspapers, books and other expert pieces. So, why do we need Wikipedia at all?

Wikipedia is not by experts: As suggested in the previous section, Wikipedia is written by people who have enough time to write an article based on many other articles and reports they read. So, what you need to write a Wiki article is not an expertise in the subject you write but just the art of manipulating loopholes on Wikipedia policies list and get your sources and arguments validated. And that means anyone who is a science graduate can write about historical events and a history postgraduate can write about nuclear physics because they know how to get their paragraphs validated by biased editors on Wikipedia. Is that what you want you or your children to read? It is highly amusing to see people taking pride in their wiki-knowledge when we all know this is humorous as well as dangerous to take anything written on Wikipedia at its face value. Be alert.

Wikipedia does not have guts to own up what it offers: Have you seen anywhere that Wikipedia proudly says it is proud of what is there on the website? Wikipedia is not credible and the owners know this thing. Therefore, their policy clearly mentions that you are on your own if you cite Wikipedia or use the piece of information on Wikipedia in your works. A platform that cannot own or be responsible for the content it offers cannot be trusted. Encyclopedia owns up its content and that is why they are the credible, valid and authentic source of information. A dictionary owns up to the meanings it offers and that is why we can easily trust it. On the other hand, Wikipedia is an entirely manipulative, easily beguiling and absurd source of information which cannot stand by its own offerings.

Wikipedia is a biased platform which hates some and respects some: I am not saying this alone. Millions and even billions who read Wikipedia more than often feel the same, speak the same and complain about the same thing. Wikipedia’s articles, which are confusingly locked (given the claim that Wikipedia is an open-source platform) are highly biased and promote terror, communism, hatred for a country, region, religion or ideology. You can see these ideas in action when you read some of the articles which feature religion, ideas, ideology or something in the same domain. On the other hand, even if you offer credible sources and attempt to edit these articles, you may be barred from using Wikipedia and the article editors WON’T accept any changes – how much open source is Wikipedia, Jimmy Wales? Who is paying you to abuse one and worship one?

The degradation and erosion of Wikipedia is a very relevant example of things starting as revolution and changing into propaganda and hatred campaigns. Wikipedia used to be good unless a free revolution became a tool to earn money, a platform to make someone celebrity and others villains, a website which offers free content but people are making money to write the same. Wikipedia has belittled itself to the clown which used to make people laugh at the beginning but began to peddle a certain act of entertainment later. Laugh this way or weep!

Readers, if you are also a Wikipedia knowledge consumer, it’s the time to get serious and read experts rather than reading jobless teenagers with no worries who can write anything and Wiki bots validating this as ‘knowledge’. Save your time, intellect and also vision. All the best!

Monika Arora’s Delhi Riots 2020: the untold truth gets leaked in PDF and who did it?
Emotions, original ideas do get lost in translation! Yes, it matters.
Comment