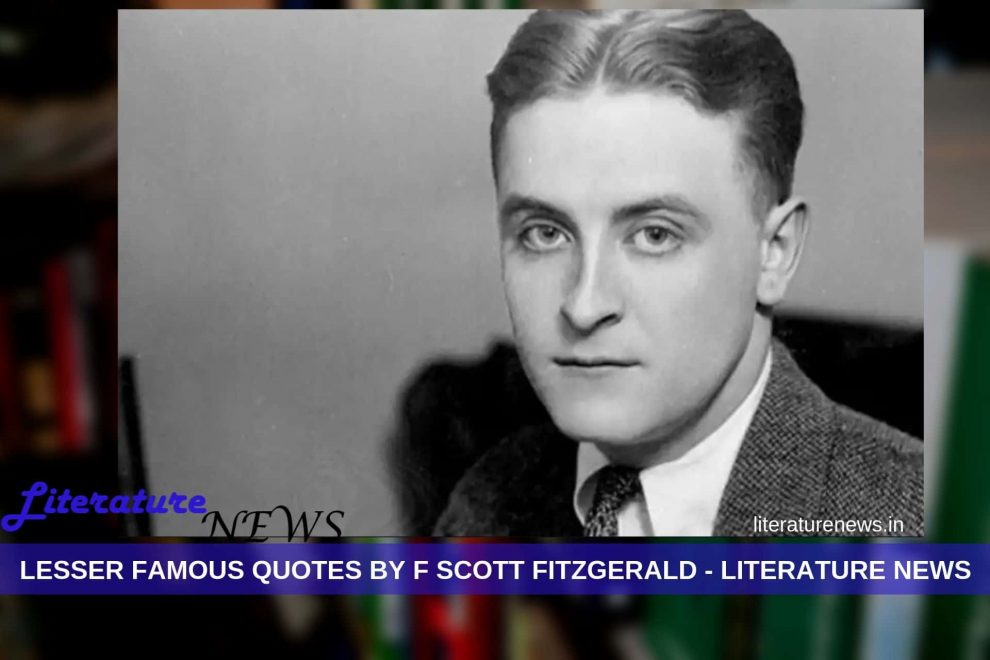 F. Scott Fitzerald, the key novelist to represent the illusionary disillusion of the modern age, had a key in his name as well – Francis Scott Key Fitzgerald. Fitzerald’s works are still very popular among the lovers of English novels. His works became immensely popular in his lifetime and the popularity, as well as an academic interest, is still the same or keeps increasing with the passage of time. Today, we are going to present F Scott Fitzerald’s mostly unknown and lesser famous quotes to our readers at Literature News. Also, there will be a brief analysis of the quotes.

“Once she kissed me very long,

Tiptoed out the door,

Left me, took her light along,

Faded as a music fades…

Then I saw the changing shades,

from First Love, a poem by F Scott Fitzgerald

The ending of this poem tells a story. A story that anyone with a heart can read and understand as he reads. The helplessness of love or ideas to love… you decide, dear readers.

“… except in a certain sort of naturalistic realism, what you enjoy writing is liable to be much better reading than what you labor over.”

from Contemporary Writers and Their Works by Fitzgerald

This excerpt from the essay by Fitzgerald talks about the responsibilities of a writer. What one enjoys writing should be enjoyed more when someone reads. Otherwise, the ‘labour is certainly lost’ and that’s not a good deal either for the author or the readers.

“I had one hundred and twenty-two rejection slips pinned in a frieze about my room.”

from Who’s Who – And Why by Fitzgerald

Taken from the autobiographical essay by the novelist, this explains the frustration that a writer has to go through before the doors to luck open. However, in the same essay, Fitzgerald writers that one of the publishers who rejected his story four months earlier, accepted the same!

“The Oxford Book of English Verse. This seems to me a better collection than Palgrave’s.”

In a list published by “Jersey City Evening Journal”

Many of us believe that Palgrave’s is the epitome of poetry collection published since the dawn of literature (English). However, for F Scott Fitzgerald, The Oxford one was better… reasons best known to him!

from The Rich Boy, a short story by F Scott Fitzgerald

This is… perplexing. You can decode it according to your thoughts. We will leave it here.

“Show me a hero, and I’ll write you a tragedy.”

Does it require any contextual explanation? A hero is not made by flowery romances but by a tragedy that brings out the rigid and the tough side of a person with guts and heroic determination. This one, however, is a very famous quote by F Scott Fitzgerald and is quoted by many in many places.

by a contributor to Literature News