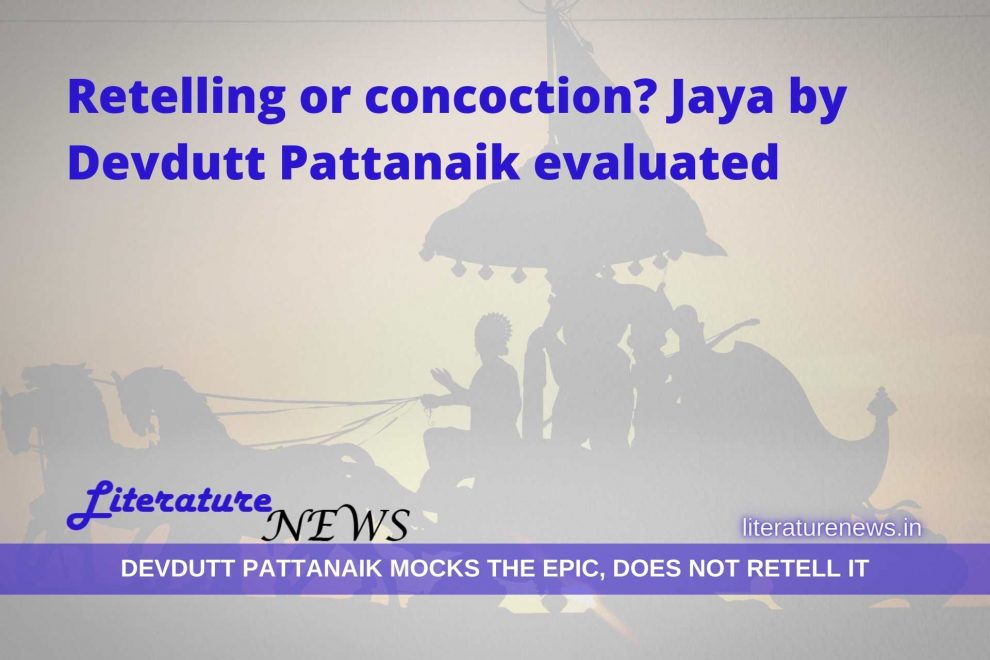 Devdutt Pattanaik is an author who has brought him fame for his awkward, offensive and inappropriate acts on social media more than for his merits as a writer. By this, you can easily fathom the depth of water in which this mythologist stands. Devdutt Pattanaik claims he knows ‘too much’ about Hinduism, Hindu epics, scriptures, and myths coming from ages. However, reading his books changed (entirely) the perception about this author that his PR agency, the publishers and people with a conjured tilt in their prejudice have craved to build around Devdutt.

To quench my curiosity, I tried reading Jaya, a subtle retelling of the Mahabharata. I succeeded. Devdutt has also included pictures to emphasise his narrative (as he knows his narrative needs visual support, unlike the Gita Press editions that are so persuasive). Jaya is not the Mahabharata I expected. It is merely a modern spin that falls flat in front of the original epic that survived many invasions and savage attacks. Devdutt tries to demystify the myth, and he believes in the myth at the same time. Moreover, the way he has simplified or normalised many ideas is more than bewildering – something is not right.

The author has tried to equate magic with Mantras. False equivalence and derogatory too, in many ways, keep coming to you, as a reader, and you can only find yourself surprised if you know where things are going. There are many occasions where the author has crossed the line of dignified language. However, the author has already asked for readers’ indulgence with parental guidance in the case of being under 18. Still, I do not understand this experiment. Amish and Anand Neelakantan also concoct the ancient epics but they, I have to admit, keep the dignity of the narrative intact, at least in terms of language offered to the readers.

Jaya is supposed to serve the purpose of introducing new readers to The Mahabharata. However, it does a disservice if that is the supposed purpose of the book (many critics favouring the book have touted this aspect). Amar Chitra Katha, Gita Press Introductory series, or any other version published in the 90s or before still does a better job than Devdutt’s galvanising version published surprisingly by Penguin India.

Here is an example of miscommunicating the facts, in a very confusing order of sentences as well:

“He started practising archery at night blindfolded and, to the amazement of his teacher, developed the skill of shooting arrows at the target without depending on his sight. Because of this, (sic) he became renowned as Gudakesha, he who has conquered sleep.”

Why was Arjuna called Gudakesh? Because he could use arrows with a blindfold or he did not sleep at night? The fact is that only Sri Krishna called Arjuna with the name Gudakesh while bestowing upon him the Wisdom of Gita. This author has mixed cups and plates with pens and papers.

There are many other inconsistencies in the text. I am surprised at the job that editors at Penguin Publication have done. The author can be excused because it was his intention – you can see his frustrations when he is called out for the mistakes he has made on social media. Keep your children away from books by him and give them something they can learn from and imbibe values in their lives rather than learning the wrong facts.

Harjeet Khanduja – the R. K. Lakshman of Business Decodes the Cryptic Concepts of Leadership & Decision-making for many
Seema Seth – the purpose of my writing is Entertainment – first and foremost… author of Yashoda and Krishna
Comment