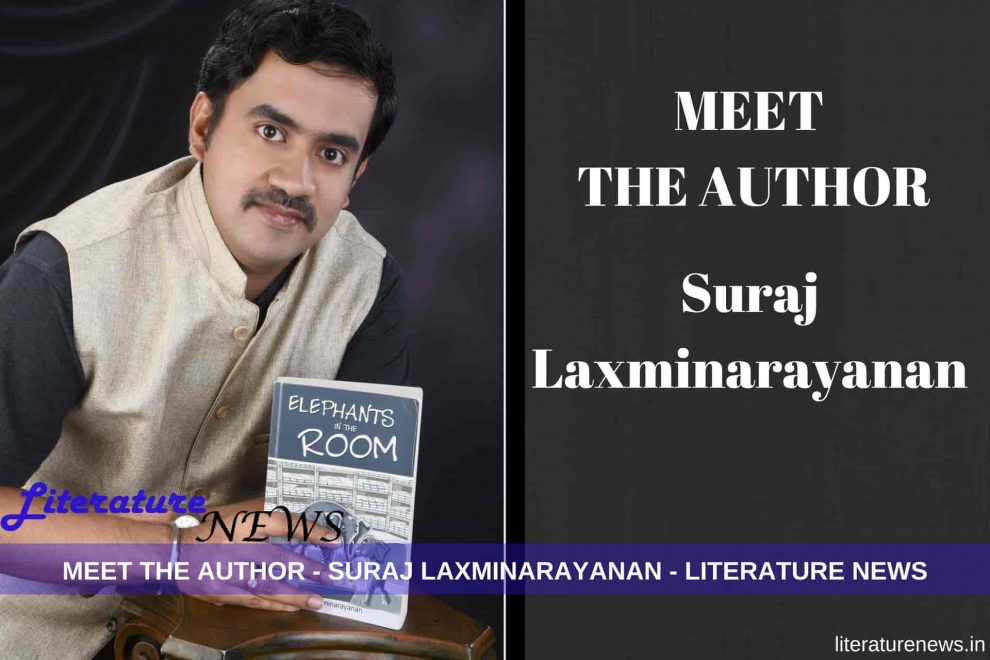 Suraj Laxminarayanan is a novelist based in Bangalore. Recently, he has penned his debut novel titled Elephants in the Room. For his debut fiction, he is gaining critical attention because he could manage to pull out a great piece in his very debut. Today, readers of Literature News will get some insight into his writing and vision.

There has been a trend in India, since the success of Chetan Bhagat, of engineers turning into authors. Many have turned and many have tried to turn; however, the transition hasn’t been that smooth for each one of them and some of them couldn’t hold on to their newly taken roles. Nevertheless, there have been some extremely successful engineer-authors and today, I am going about talk of one from this lot – Suraj Laxminarayanan.

A software engineer by profession, Suraj Laxminarayanan has been a very big fan of crime and thriller fiction since his childhood. Reading and watching movies of this genre have fused in him the want of writing something similar long ago and his recent change in the armour – from a keyboard to pen, has been the result of that zeal. His debut book, scheduled to be released in the mid-August, Elephants in the Room is a crime thriller mixed with elements of amusement and light-realism is being appreciated and liked by the critics as well as serious readers of fiction in India.

Emerging authors have proved that Indian English fiction has a lot to offer in the coming future. One previous opinion published on Literature News talked about the dawn of Indian English novels, from the early days to the present and this article is a testimony that from the many ones who aspire to become successful writers tomorrow, a few do have the potential to make it happen. Suraj’s debut book is a lengthy novel and it goes beyond 500 pages… 598 to be precise but he has managed to keep the fiction alive. His art has sustained the developments and proceedings of merely four days and bring out a novel of this!

Suraj Laxminarayanan’s writing, unlike most other newcomers who take the escape route and come out with extensive romantic (rather sensual pieces of fiction), has focused on something concrete. His novel has the unheroic heroes and realistic villains. Written in simple English, the debutant author has kept it near the casual readers which makes the novel an entertaining piece and the author a people’s author.

Asked on what kind of works he would love to write, the author has to say:

“I would love to create stories which entertain the audience. Keeping the readers engaged and entertained should always be my first priority because if that doesn’t happen, they won’t be reading my works! I focus on creating lovable characters who remain in readers’ mind long after reading the book. I think of leaving the readers transformed by allowing them to make their own inferences from the story.”

In the modern age, the description and dimension of literature (mostly fiction) have changed dramatically. Except those who are compelled, people seldom indulge in classics and that’s why the authors have to manage their writings in order to get the attention of the readers and remain contemporary and relevant. Suraj Laxminarayanan has managed to do so with his very first fiction and his novel, Elephants in the Room, is expected to deliver well among the readers. We will keep you updated when his book is released.

feature by Amit for Literature News