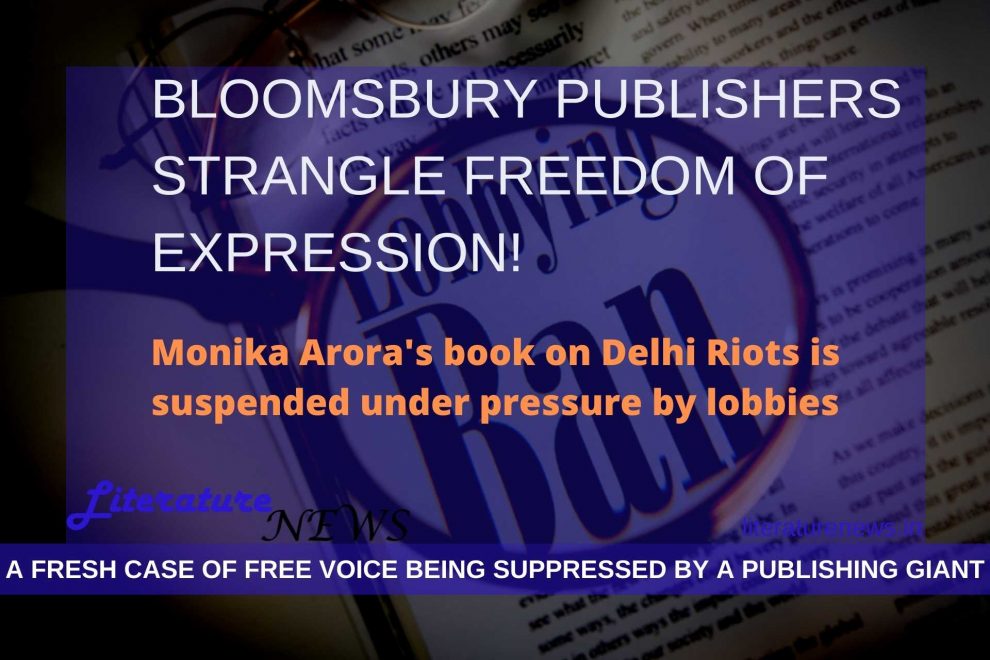 Bloomsbury India has landed into a fresh controversy which seems entirely novice and unnecessary. As a publisher, you sign up with an author, agree to the publication of content, and bring the book into the market. This is a simple 1,2,3 mathematics that anyone knows. However, the book by Delhi-based supreme court advocate and a vocal activist, Monika Arora, has been suspended by the publisher citing reasons which are not only juvenile and apparently absurd but also hint towards a bigger conspiracy which is calling a much-needed inspection. It is quite evident to the world, by now, that there is a group which is scattered internationally that tries to monopolise the intellectual discourse by deciding what is ‘right’ and what is ‘wrong’. Not only that, there are the campaigners of the free speech in the world who don’t only campaign for the wrong but also ensure that the ‘right’ does not get any voice. Is it the new age truth? Well, it may be!

Delhi Riots: 2020, a book put for sale online, advertised on social media, and even bought by a few readers, have been suddenly disowned, disavowed and discontinued by a reputed publisher in the form of Bloomsbury India, which is, in turn, owned by Bloomsbury Group of publishers, UK. This not only hypocrisy on the part of the Bloomsbury group but also a clear partisan decision that they are taking by publishing a book on Shaheen Bagh, an apparent propaganda movement which derailed Delhi by instigating riots in the same year. Bloomsbury Inda has much explaining to do in terms of their policy decisions on how they find out a book based on facts that we don’t know and a book based on propaganda that we all know.

This decision by the Bloomsbury publishers has also re-ignited the debate on freedom of expression. Is this a one-way road? Can only those who are on the left side of the line or on the appeasement side of the line have the liberty to express themselves? While the author, Monika Arora, is very confident of her publication and many other publishers will certainly sign her up, the publishers are left with a red face and many authors who were already signed-up for publications coming in the future have begun to break their ties with the publisher.

On the other hand, this incident, which is more alarming than it’s unfortunate, exposes the double standards of the so-called champions of freedom of expression in India who advocate freedom to express one’s opinion on one side and conspire against others’ freedom to express their opinions. While the book will certainly be published and the readers will know the truth about the unfortunate and orchestrated Delhi Riots in the year 2020, the Bloomsbury publishers in India and their international headquarters are not only left with a blot upon their reputation but also find themselves on the verge of a massive boycott not only by the readers but by the authors as well. They have played their cards by playing into the hands of a pressurising lobby. The readers and the authors have their turn now.

Munawwar Rana, an Urdu Poet, not only justifies but openly calls for murder – France terror attacks
National Webinar on “Representation of the Buddha and His Dhamma in Literature” by NNM, Nalanda, Bihar
Comment