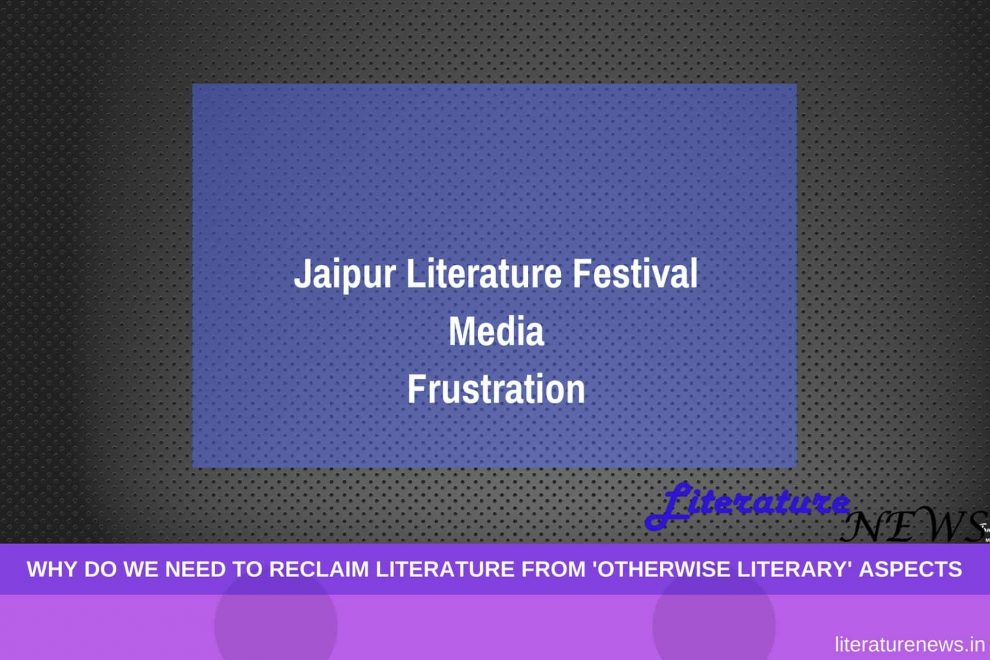 A literature festival should celebrate literature and creativity. We all have been seeing the same when we visit one or some of such festivals. However, the Jaipur Literature Festival, like the ones held before by other organisations, has been politicised and the media is rather taking interest in promoting political jibes and political scores instead of reporting on what the authors and the poets say. We are getting news about Hinduism, Hitler, Hindutva, Karni Sena, Sushma Swaraj’s Hindi push and so on. We will never see or seldom will get the chance to see a report on the plot construction, verse-imagination, birth of poetry for a poet and other things. We were told that the biggest group of poets will be here in Jaipur to discuss various issues on poetry and everything related to poetry. However, we are reading how Nayantara Sahgal sees Hindutva as ‘an extension to Hitler & Mussolini’s idea’ or why Shashi Tharoor is proud of being a Hindu just before the elections in Karnataka. Way to go, Jaipur Literature Festival!

People look for respite from the tedious and bizarre usual days which is filled with politics and divide and they often visit literature festivals to get an insight into the process of creating literature. Instead, they find it even more boring under the umbrella of ‘the biggest literary event in the world’ and are left bemused, cheat and aghast!

On odd days, media seldom report on creativity unless they have the drive to do so. The book should be religiously ionised or it should be politically packed or it, at least, should be against the ethos of the nation. The newsdogs in media will bark relentlessly – sidelining the author and his real motive behind the work and will set their personal scores. In days like this, when people are anticipating some real literature and some genuine literary interaction, we are still getting the news on Hindutva and politics because it suits the narrative of certain people.

Media, especially in India, have soaked themselves into the bipolar divide within the media so much that they have to build and counter build various narratives to remain in the loop of the happenings in the country. Sadly, literature and literary gatherings have also not been spared of their attack and defence policy. If you still want to believe that literature festival is about literature only, you are either living in a delusion of you need to widen your horizons of thinking. And it is true that literature has to bear and reflect the effects of politics but it is not at all true that literature means politics; if such a thing happens, we have to understand that literature is somewhere failing to be literature inherently. We need to claim it back from the corridors of power and opposition and the politics in between.

Let’s hope that this eleventh edition of Zee Jaipur Literature Festival somehow identifies the true literature and media helps the event by reporting not on the fault lines but on the things which can ease the literary enthusiasts.