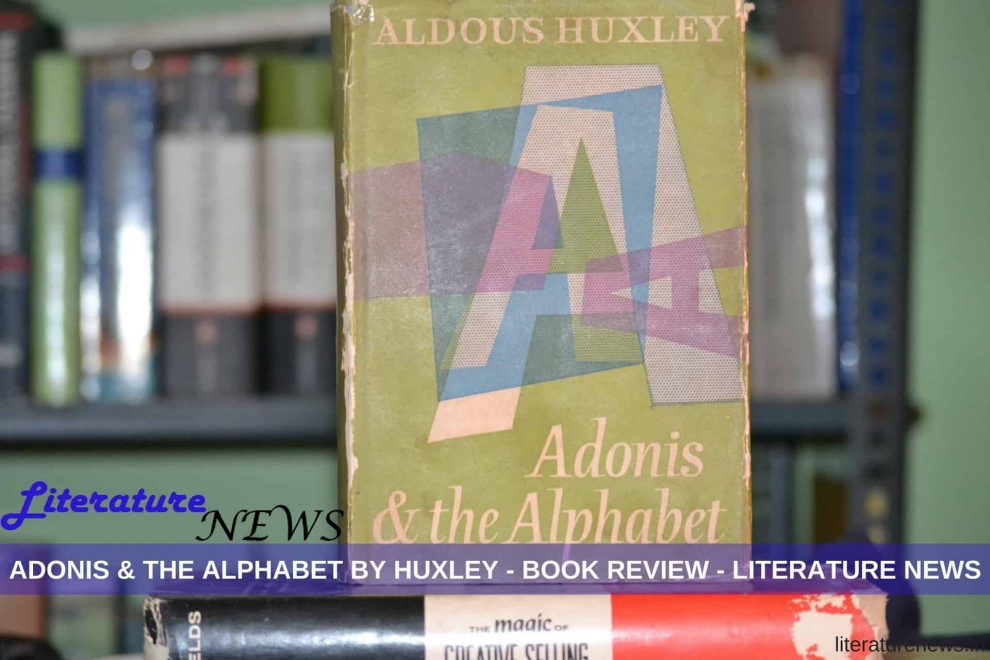 There are the authors (and there were, of course) who indulge themselves in writing the works which are not liked by many readers but certainly appreciated by, almost, every reader who goes through them. One such author, if I can say that I know many, is certainly Aldous Huxley. His books are not very popular like are the books by Jane Austen or even T. S. Eliot. However, those who know Aldous Huxley, do appreciate his works in the non-fiction genre which changed the course of literature in non-fictional prose – essays and scholarly writing. To cut short and wrap the caveat, Huxley’s writings are erudite and immense and have a strong impact on the readers – negative or positive outcome depends upon the perusal!

Today, I am going to write a review for Aldous’ collection of essays entitled Adonis & the Alphabet. This was published in 1956, 35 years before I came into existence or acquired a body for my spirit as Huxley says – man is an embodied spirit. Hold on, dear feminists, Huxley was just writing a common sentence. He did not intend to imply, by any means, that a woman is not an embodied spirit.

So, why should one read this book Adonis & the Alphabet? Is it any good? Will my review suggest you reading this one? Will I propagate for Huxley’s work like his PR agent? No way! I will even warn the casual readers that they should stay away from the works like this because it will blow their minds’ juices out of proportion!

“What Wordsworth called ‘natural piety’ a teacher of understanding would describe as indulgence in emotionally charged memories, associated with childhood and youth. Factual memory – the memory, for example, of the best way of making sulphuric acid or of catching up accounts – is an unmixed blessing. But psychological memory (to use Krishnamurti’s term), memory carrying an emotional charge, whether positive or negative, is a source at the worst of neurosis and insanity…”

Did you get it, casual readers? That’s why I always suggest only serious readers read such works because it demands invention of ideas and injection of thoughts.

There are seventeen essays in the collection Adonis & the Alphabet by Huxley and all of them are more or less on the abstract issues those tend more towards psychology and philosophy and intellect. There are also the elements of humour or scholarly humour I must say, involved in some of his essays which let us laugh in amusement and energise with the implicit wisdom of those moments of satire. The analogy of insurance companies with the fortunetellers is marvellous (Tomorrow and Tomorrow and Tomorrow).

As usual with Aldous, he invokes the learnings that he gathered from Hindu, Islamist and other philosophies and presents to the readers his erudite writing in the form of various essays. He won’t let you bore (metaphorically). Adonis & the Alphabet is a collection of essays which are not necessarily systematic and may be chaotic as well, but they are something worth spending your time. His philosophy is not myopic. It’s immense.

Do enjoy and read his essays whenever you have time. There will be nothing like Aldous Huxley that you read – other than his writings, of course! He hits the conscience of his readers and makes them think; instigates them to get excited intellectually and start the race with thoughts. I have seen very rare ones among the authors I read to be so much charged up, intellectually!

You can get the book from the link below (yeah, it’s a dare!).

Adonis & the Alphabet on Amazon – get it now