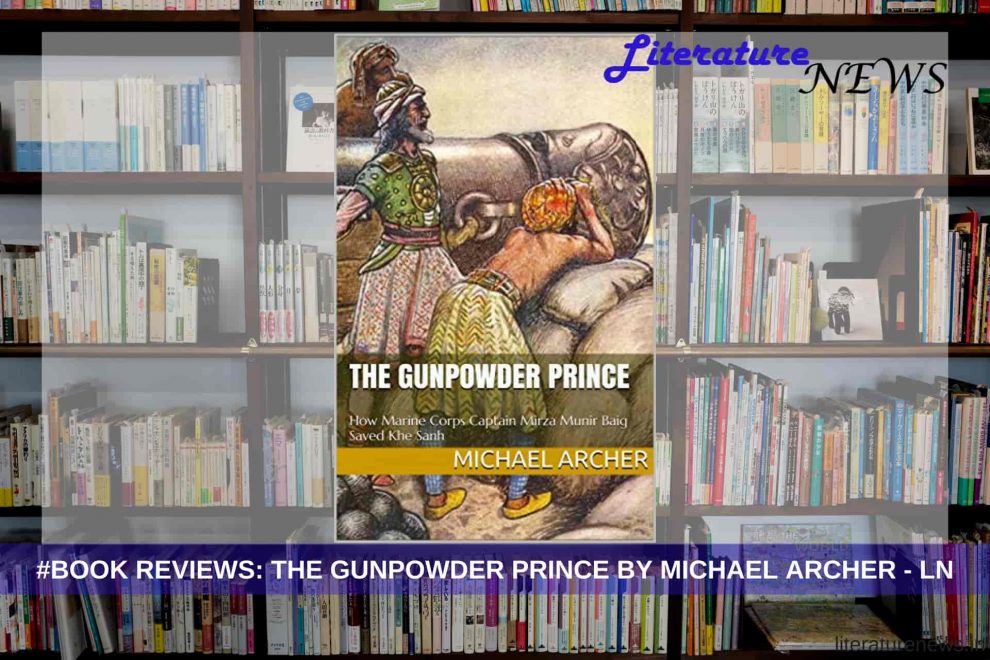 Book: The Gunpowder Prince: How Marine Corps Captain Mirza Munir Baig Saved Khe Sanh
Author: Michael Archer
Review by: Amit for LN
Published: 2018
Pages: 145
Format Read: Kindle
Rating: 4/5 stars
Highlight: “Michael Archer takes us behind the curtains of a historic war… he tells us the story of an unsung hero who not only saved lives but also brought victory to the USA.”

“Prominent among them was thirty-six-year-old, Marine Corps Captain Mirza Munir Baig, a scholarly, Cambridge-educated, Pakistani immigrant, born in India. His unique combination of classical education, years of counterintelligence work helping to develop spy networks deep into North Vietnam, and an incomparable expertise in the use of field artillery, enabled the enigmatic Baig— like a chess grandmaster— to “get into the heads” of enemy tacticians, including the legendary General Vo Nguyen Giap, and anticipate their every move.”

I would like to start with the description of Captain Mirza Munir Baig that the book offers in the very beginning. The Gunpowder Prince is all about Captain Mirza Munir Baig’s resolve, tactics and craft of war that saved the US army officers and brought them the win at the battle of Khe Sanh – and the author, Michael Archer, who has himself been in US Marine, was also a part of that troop which was there in Khe Sanh, Vietnam.

The book begins with a detailed background of the Baigs and the author has done a good research in bringing out the family history – Captain’s father, grandfather and so on. The significance of the dynasty in the various history of wars is clearly evident. And moving ahead, the author sets the prelude to the historic battle of Khe Sanh (January-July 1968), and also offers us an amusing but remarkable account of his first sighting of the man – Captain Baig:

“I was amused by his peculiar Sherlock Holmes-like deductive approach to counterbattery artillery fire, made even more Holmesian when he ordered up the artillery fire mission to a nearby radio operator with a high-energy burst of British accent.”

As Michael, the author, was himself involved in this battle as a radio operator, he got the chance to observe the activities and tactics of Captain Baig very closely.

The remarkable thing about this very interesting book is that it offers the first-hand account of the author himself and also offers some inputs by Captain Baig (quoting from his book). It makes it very interesting for the readers, who are interested in the history and ‘truth’ about the Khe Sanh battle. Along with the on-ground facts, Michale Archer also provides his opinions and insights about the CIA movement, American Government’s movement and also the enemy movement. Archer also asks several important and thoughtful questions throughout this book. Such as:

“Over the succeeding years I have been unable to find a satisfactory answer as to whether, having been pre-targeted for such a bombing, the Pentagon would have given final approval?”

The US army, only about 6,000 in number, were surrounded by no less than 30,000 NVA personnel. And the question that Archer asks is indeed very important as he also cites an old reference to the Dien Bien Phu’s situation.

Then, going into the details of the possible reasons that why did Hanoi want to pose as if it really wanted the US army out of Khe Sanh but did not do it, Archer explores the possible theories. He writes that might the NVA have used the Khe Sanh siege as a mere decoy to strengthen their positions on other important places. There is a long chapter that interested readers can surely read and enjoy. In the chapter dedicated to thoughts on this particular area of the Vietnam War, the inputs by Baig are very important. (Chapter 11, Hard Luck)

Well, Michael’s book becomes very important for Indians and also the Pakistanis because the hero of his book, The Gunpowder Prince, shares a close relation with India as well as Pakistan. Have we really known about Captain Mirza Munir Baig in detail? Michael offers us a chance to know about a legendary war hero and the readers must not miss it!

In short and to conclude my observations or the review of this book on the heroic survival of the US army led by Captain Mirza Munir Baig, I would like to submit that even this book not many of my war books, I really enjoyed the details, descriptions and idea behind the book – to bring to light a lesser acknowledged hero who changed what could be adverse for the US. Guys who love reading documented and true accounts of war or war histories would be very much happy with this book, that I am sure. And those readers in general who want to know more about Khe Sanh battle and its importance for the world history must read this book by Michael Archer. You can get this book on Amazon:

The Gunpowder Prince on Amazon – get now

review by Amit for LN

A documented and true account of the Khe Sanh battle by Michael Archer… it tells the readers about a hero who did extremely well and saved the American marines who were surrounded by more than 30,000 NVA personnel!