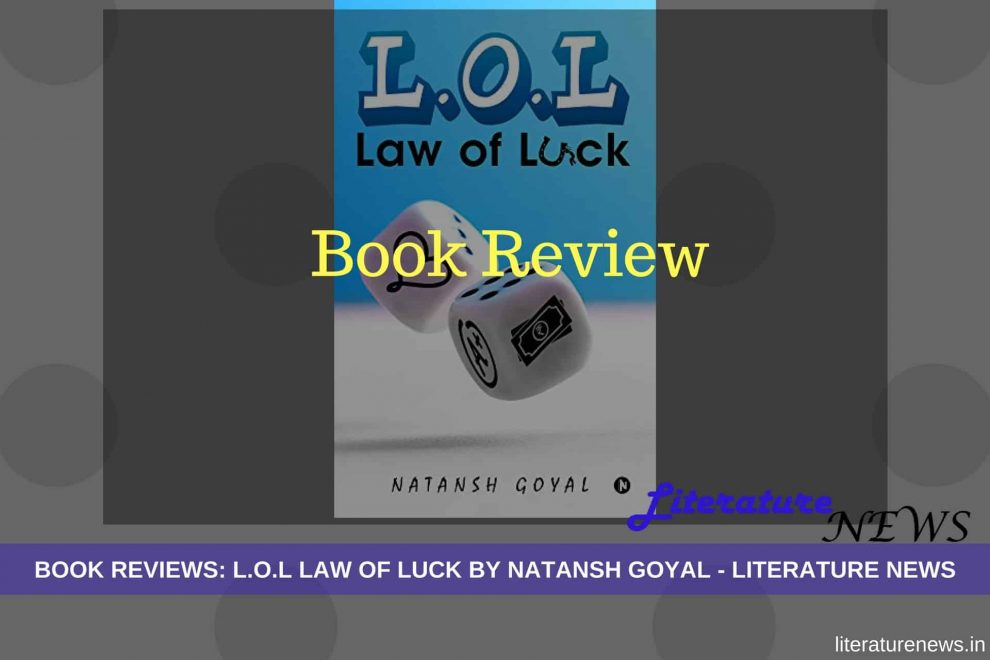 Natansh Goyal’s debut novel, L.O.L: Law of Luck, is a book which did not let me put it down! I am being frank about it – recently I read a book by another debut author and that did bore me on certain occasion but Natansh’s book just flows; his narrative is not so powerful and class, but certainly capable enough in an untraditional way to hold reader’s curiosity and feed it story that the author wants to tell. L.O.L: Law of Luck is a novel which might be seen as a real LOL – you will be amused and forced to laugh on many occasions. Besides the laughter, the novel also has certain potential as it teaches the readers the precious law of luck – visualise, believe and let go!

In short, the story is about Ravi Gupta, a loser in his life who loses his girlfriend just at the beginning of the novel. He is not good at his studies either. He is totally uncertain about the career he would choose after the education (engineering). His life changes after he reads the diary of his uncle, Jeevan Uncle, who loved more than a hundred year. So, what’s in the diary? That’s the major drive of the novel which makes Ravi a winner from a loser.

On the better side, you will find Ravi enjoying a very good life – good at exams, good at getting the attention of the girl he loves and also, finally getting something for which he was craving for long – let that be found by you once you start reading the novel. The thing that makes the novel connecting with the young readers and the youth of the day is its relevance. As a young reader, you will find that the novel conveys the ideas and thoughts which are often in the minds of people who belong to the 21st century – the younger generation who are out of the 90s shackles – mentally and physically.

Apart from the narrative, on a critical level, the thing that you will certainly appreciate is the language used in the novel – it’s certainly modern and sometimes, the slangs popular among youths are also used. However, that’s certainly not cheap and a standard has been maintained. Plot is somewhat okay because only one guy needs to be in the focus – Ravi Gupta. Vaishali fades into oblivion in the very first chapter and then Alisha appears much later. Murali remains parallel to Ravi for some time… and that’s it. The invisible presence of uncle Jeevan can also be felt whenever Ravi reads the pages from his old diary.

An interesting novel, to say the least, which will make the readers’ time worth spent. You will not feel like you have read something dry. A very good one time read for all those readers who want to be treated with some funny and occasionally serious writing. Natansh has done a fair job on his very debut and his novel L.O.L: Law of Luck certainly means the LOL part!

Get your copy of this novel from the Amazon link below: (link opens in new tab)

review by a regular contributor to LN

The novel by Natansh is a very pleasant one-time read. A casual fiction which lets the readers relish the moments and enjoy the tragedies and comedies with Ravi Gupta – the protagonist of the novel.