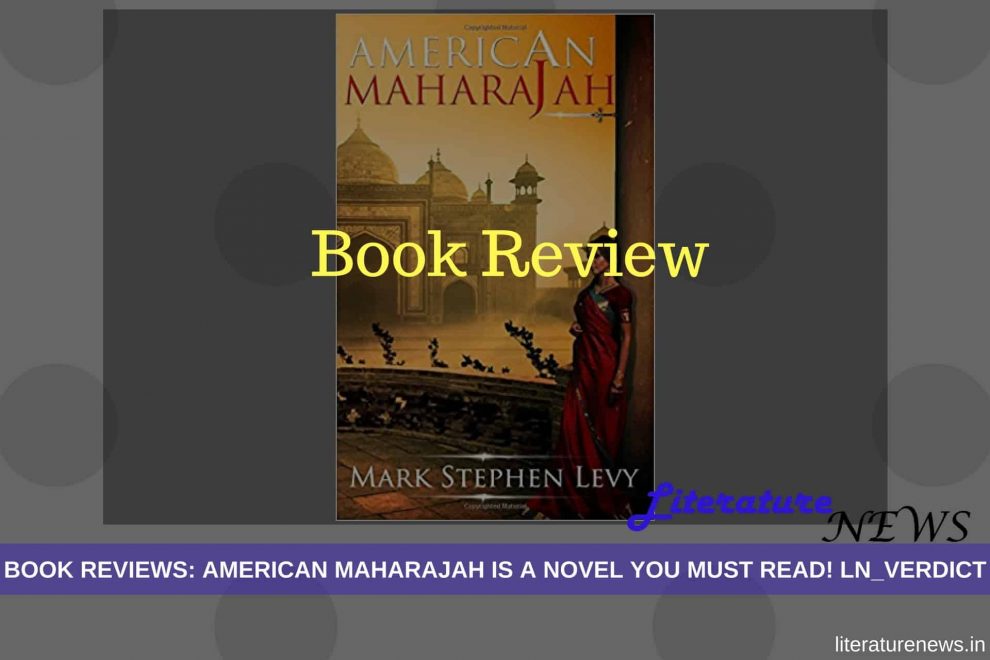 American Maharajah is a novel written by American author Mark Stephen Lewy who loves ‘nothing more than backpack travelling’ and this very passion of him has given him the body and soul of his latest novel. Starting with a mythical prologue, the novel sets the platform with the tale of an ancient king from Bharathambhor, Rajasthan. The tale tells us of the king’s son who dies and then is reincarnated miraculously. After the prologue is over, which takes no more than 3 pages, we are taken straight to the main storyline.

The novel has a central protagonist – Ravi Shankar. He is a person in his early thirties and lives in Denver, Colorado. His parents run an Indian restaurant there and he works as an IT guy in a company. His girlfriend, Melissa, is an ambitious girl and breaks up with him when Ravi is all set to leave for India for an exploration when his father offers him a chance on his birthday. Dejected by Melissa’s strange act, he lands in India, in agony and sorrows. However, India changes his life completely as Ravi finds several strange occurrences. A guy in Chandani Chowk calls him ‘Amar’ and he is baffled. He gets lost in the deserts of Rajasthan only to find himself in a palace with a beautiful young lady Aishani and an old king named Suraj Pershad who also calls him Amar and his reincarnated son. And from there, Ravi’s life changes completely – he falls for Aishani and also learns strange secrets of his possible rebirth or beyond comprehension reincarnation. He has to come back to the US because his father is ill. He promises Aishani in a letter that he will come back to them. However, will Ravi get back to India? Will he get to know the secrets of his birth? Are his parents in the US real parents? Who was Amar? Will the villagers accept Ravi as their prince as they know what happened when last time a king’s son came back from death? There are many secrets which will keep the readers indulged in this novel.

American Maharajah is a very well written novel which uses the elements of rich Indian mythology and beautifully links it to the present times. Ravi’s portrayal as a deluded person who is unsure of his career in the US and his journey to India to find the real purpose of his life can be seen as a metaphor – destiny gives you a call – we people believe in India. Towards the end, we also see the power of mantras and our belief in the Godly system. Mark has been subtle with the plot and narrative of the novel. It does not let the readers feel forcibly dragged about because it moves at a decent pace and the storyline is exciting as well. Secrets are kept and disclosed at right times and this certainly will suit the readers who want a book not to be too perplexing like Shutter Island. At right time one gets to know about Lakshmi, the Dalit woman who is a very important link in the novel. At right time, Ravi gets to know the truth related to spring’s fate which is related to the reincarnation myth. At a proper time in the novel, Ravi discloses his love for Aishani… and so many other things take place in order which makes American Maharajah a complete piece of fiction without very much of delayed decoding of the text. The language, as well, has been kept simple and a reader will appreciate it coming from Mark!

In short, guys, if you are looking for a decent 2-day read, you will surely love reading American Maharajah – the novel which comes from an author who has understood the taste of Indian readers very well. Perhaps the travel experience of Mark has made him the author he is! Get your copies now from the Amazon India link below and don’t forget to leave your feedback once you finish reading the novel. Link will open in a new tab.

A novel which has been designed in a way that readers will engage with it and will surely appreciate it. Certainly a masterpiece from Mark! You should not miss it!