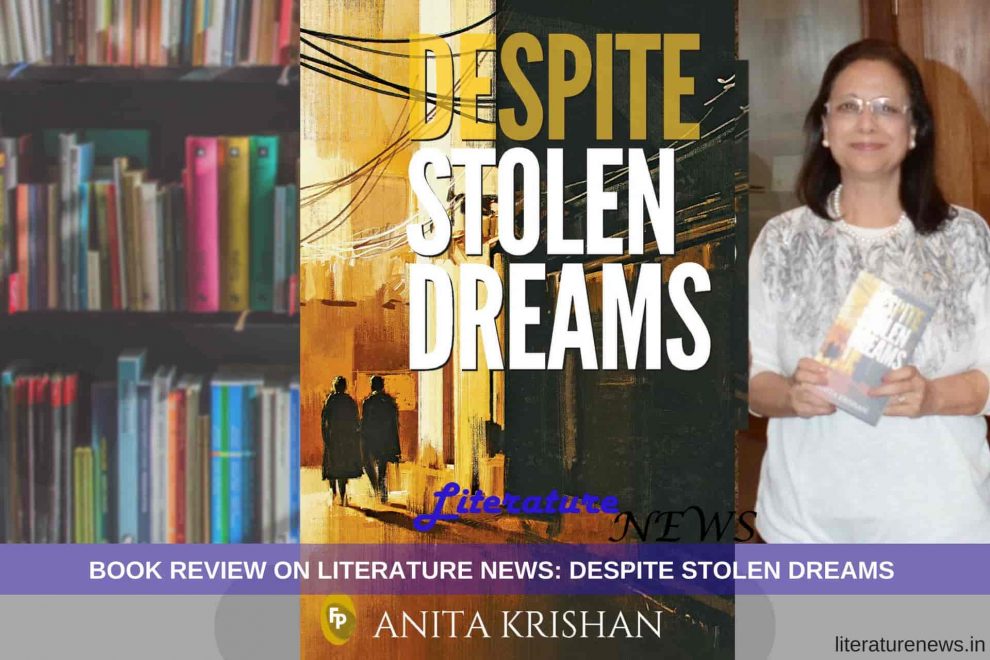 Despite Stolen Dreams is a novel written by Anita Krishan, the celebrated literary fiction writer who has set the standards high for her works because her writings are not from the usual league of modernist fiction writers; she rather goes the different way and she produces quality literary fiction which is having all the tenets of a serious piece of literature.

Despite Stolen Dreams deals with the issue of terrorism in the valley of Kashmir. It tries to sketch how terrorism in injected into the minds of the children and how are they forged into the youths full of hatred and violence. On the other hand, the novel also tells us that love and peace can certainly be looked for even in the worst of the scenarios. And the novel proves the same.

Though the novel revolves around Wali Khan, a Kashmiri who flees with his family from Kashmir leaving the terrorists in dismay, there are many other characters in the novel. Sakina, Meher, Kashmira, Rao, Rosemary, Mr. Kapoor, Shakeel, Salim, Karan, Abdul, Hashim and some others. It a fiction full of different kinds of characters – some are round and some are flat. Shakeel, the biggest surprise and Hashim, the biggest evil.

The plot revolves around Wali Khan and his search for a fearless world where he can spend the life with his family in peace. He gets it too when he runs away from Kashmir to Delhi. His children settle well but he does not find a better pastime than spending his time with a friend Kashmira Singh. They almost run riot in spreading love and harmony among the people in their society and it makes Wali almost forget the tragedy he had been through. Terror returns, however, in the form of blood-thirsty Hashim and other members of the terror group. The catch of the plot is the character of Shakeel which transforms and you need to read the novel to find out how and when does it happen! It is full of thrill at instances and otherwise, the novel is an easy read which the readers will enjoy reading.

Wisely crafted and very well-written. A reader-friendly fiction with standards very high which makes Anita sit on the top of the usual fiction writers who spin the same theme almost every time. Her novel Despite Stolen Dreams is in succession of Tears of Jhelum. It is fresh and it is constructive for sure as many critics have already pointed out. The style of writing is elevated and readers who belong to a literary background will surely love reading it!

In short, a must-read novel for everyone! It will not only be entertaining for the readers but also a very useful contribution to the Indian English literature and will certainly raise the standards of fiction reading in India.

Grab your copies from the Amazon link below:

Anita’s Despite Stolen Dreams on Amazon

A novel which has set the literary standards high once again. Must-read novel for everyone!

The Big Switch: it’s never too late by John Thomas: Book Review
With You; Without You – book review
Comment