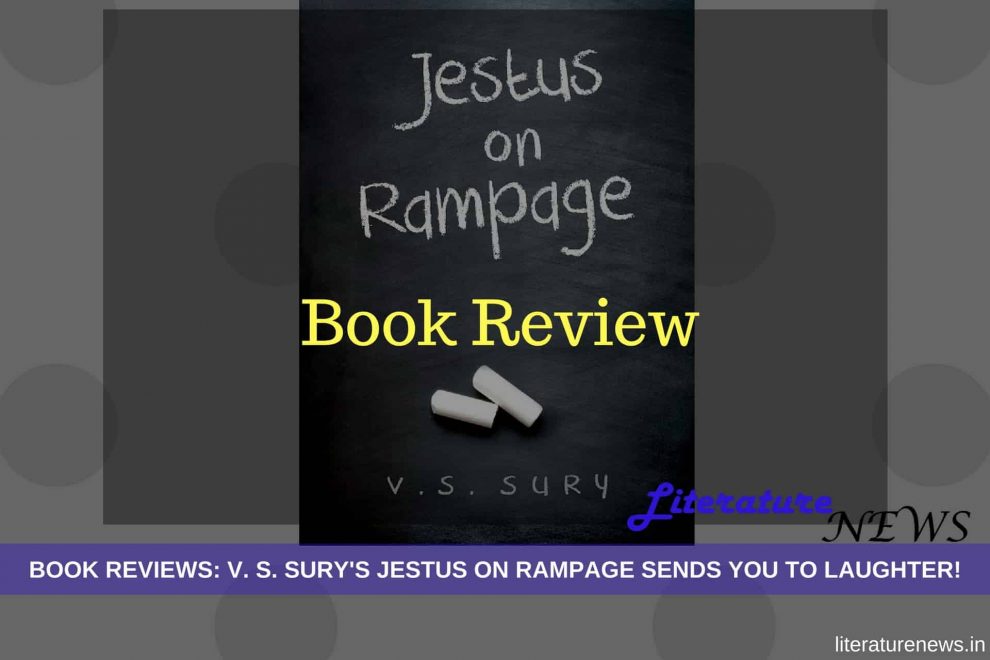 Jestus on Rampage is an unusually wonderful novel written by V. S. Sury and published in the year 2015. After the publication, it has sent numerous readers into the circles of laughter as it has been written in a way that you, as a reader, can seldom remain without being affected by the humour of Bagus aka Bagdenborg aka Jestus aka Jesticus aka Lucid Lafenstein aka Bagus Bagnihotri and aka so many names for so many occasions. The humour in the novel Jestus on Rampage is purely contagious mixed with the momentary seriousness which makes you think a lot. It is a novel which will not let you feel so sure of your reading at any moment and the ending will keep you in a fix like the ending in the movie Inception. Would you not like reading it?

A forty-five-year-old professor reaches to join NG University in some unknown place which is located 300 KMs east of California. What’s very humorous and unusual about this arrival is that the professor comes on a horseback to join the university and just captures the attention of his students in a flash with his unusual style of teaching and unconventional approach to the education. Jestus is the character who controls the plot of the novel and everything revolves around him.

He is kicked out of the university because the authority and the teachers think that he ruining the atmosphere needed to maintain the quality of education. However, even the departure of Jestus from the NG University is a gala event, just like his arrival, on the horseback, with pride!

Jestus does not fit anywhere he goes and even the society he lives in has a problem with him. People want him finished but he manages his survival and he keeps flirting with the evil ideas and schemes of people who want him off. You will love reading the instances.

The writing style of V. S. Sury is something you would be baffled at times but humoured most of the times. It is random and he often picks a random name for his protagonist who almost knows every possible thing – like everything. He has kept the plot not so wide and it focuses on the ‘rampage’ that Jestus creates with so many names and so many qualities of him! Throughout the novel, you will be reading the things which involve this or that thing by Jestus under different names.

In short, you will have an unusual novel in front of yourself which you can enjoy, for sure. The problems that it raises are of secondary importance instead of the first which is purely the humour part of the work. You will have to read it carefully enough to educe the seriousness out of it. You can get a copy of the novel Jestus on Rampage from the Amazon link below:

Jestus on Rampage on Amazon India

If you are stuck with your genre-lust, you should read this work by author V. S. Sury. It will take you to the lanes of laughter and you will surely like the things that Jestus does!