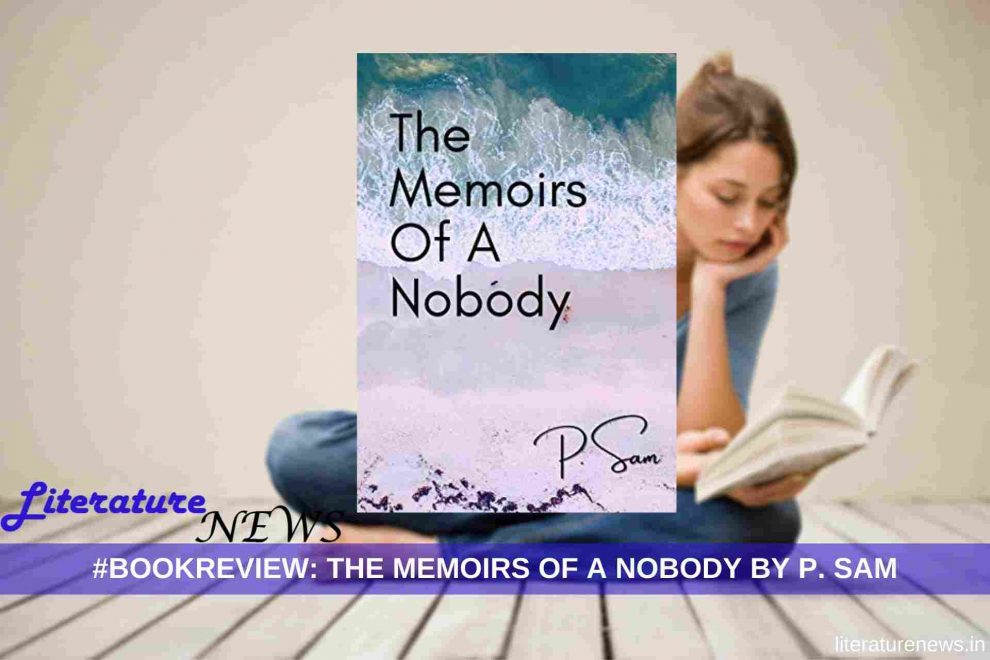 Reading romantic novels written by modern Indian novelists often lead to the same conclusions. However, there are some exemplary pieces that can let a reader rejoice, think, ponder and also enjoy what he or she reads. I can say the same about a novel that I read recently, The Memoirs of a Nobody. The book has been written by P Sam. Well, I can say that it has been prepared in a way that teenagers, youths and mostly young readers will enjoy. It is because most of the youngsters will relate to the circumstances, events, characters and their emotions as well. However, even critical readers will be able to salvage a few points from the novel that can make their time with the book a memoir of somebody!

The book begins in future, sometime in 2022. Aarav, who is on a family trip to Indonesia, accidentally receives a book from his daughters who found it on the beach. And then, the novel begins, taking the readers (as well as Aarav) back to years of Ambi’s (the protagonist) upbringing, board exams, fun and seriousness and so on and so forth… The novel largely covers the year of courtship, supposedly, unacknowledged confessions and seemingly love affair between Ambi and Arth. The Memoirs of a Nobody perfectly justifies the novel’s title only until Aarav comes to know about the story in totality. However, the conclusion keeps him perplexed, wanting to know more and also worried as it ends at a point that the readers will certainly find intriguing. Well, they might have to keep waiting for the part 2 of this work. That can only clarify what happens next and is the love story having more twists for them.

This novel might be construed from Ambi’s point of view (as we only have that at our disposal). She grows up to be a mature person with her own ethics and rules of engagement. However, as nobody is perfect, she also makes some mistakes in understanding (or responding to) the relationship between herself and Arth, someone that she likes and wants to be close to as well. However, this novel is about the same – when we err in understanding relationships, human emotions and we don’t have the time to repair things because of fate.

The narrative of the novel is not very subtle but it perfectly resembles the world around us today. The author has taken care of putting thought-embodiments as her characters – the issues that we deal, the emotions that express, the ideas that we have… youths get a lion’s share in all these. Ambi’s character represents the woman of this era. Arth is a typical young man who is misunderstood. Other characters play their part as the author should have intended. I don’t approve such a plot with two central characters and many pages. However, this is how it could be – the author must not have many options left. Aarav’s role as interpreter of Ambi’s expressions may be liked by many readers for his subtle opinions and quick reflections. The author has used him as an approver to take the readers into confidence in the terms of Ambi’s coming of age, her maturity and her views getting broader and sharper.

Overall, this is a love story with a very simple narrative that focuses more on Ambi than anyone else (because this is what the work is about). The author has tried to mix a feminine assertion (you will find some opinions on marriage, class, etc) with a romantic storyline and she has succeeded to a good extent as well. So, this novel has a thumbs up from my side and I think it will not only please the readers but also force them into reflection… get a copy now! The link to the book is below:

Buy the novel from Amazon – get a copy by clicking here

Review by Amit for Literature News

The Memoirs of a Nobody by P Sam – Book Review

The Memoirs of a Nobody by P Sam is a book that tells the story of someone who has lived a life full of emotions, fun and also seriousness… Ambi’s story may have many admirers… a good intriguing romance.