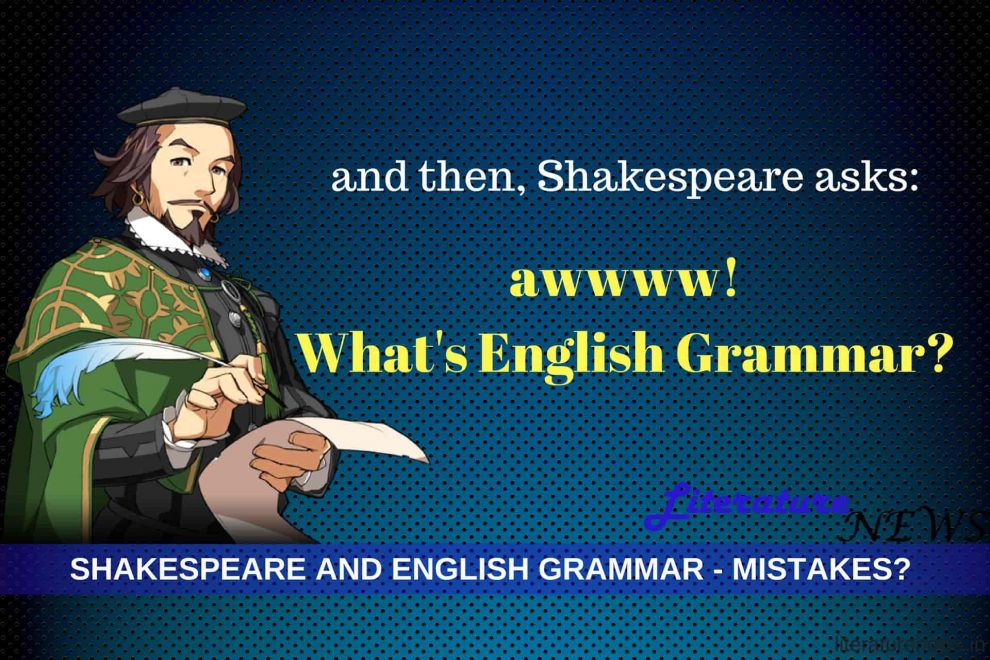 Though much of it remains in the embrace of ambiguity, Shakespeare’s formal education is said to be commenced at The King Edward VI School at Stratford. By the standards of those days, it was a Grammar School and Shakespeare spent 7 years of his life here; he was 7 when he joined the school and 14 when he left it. However, it is all a perception (a common perception) that the scholars have among themselves based on the study of his writings. Further, one should be careful before judging Shakespeare based on his primary education, because, by the time he left the school, he had already studied the works of Virgil & Ovid and many other Latin authors. He also participated in plays of the Latin dramatists. So, let’s give it away that Shakespeare did enjoy a worthy education which (perhaps) shaped his playmaking skills later in his life. However, what about Shakespearean Grammar? Did his deliberately play with the basic grammar rules or there were no rules of English grammar by then?

Perhaps the most influential and ‘independent’ book on English Grammar in England was introduced in 1762 as A Short Introduction to English Grammar, with critical notes. Though published anonymously, the book was written by a professor of English Poetry, Robert Lowth. Before this version, there were many books on ‘English Grammar’ published and circulated in England and the ones which Shakespeare might have studied was Rudimenta Grammatices, published in 1634 and written by the well-known grammarian William Lily. Although, this was not an English grammar book! Rudimenta Grammatices was a book of Latin Grammar and the schools those days followed the same. Moreover, it did not include the rules, regulations, laws and ambiguity that today’s grammar books contain. It included the writings of great Latin authors who were thought to be apt to be taught to the students those days.

So, one can be sure that Shakespeare did not follow any grammar of the English language as such and his writings, therefore, were bound to be independent of any predicament of grammar rules. That’s why we see the usage of language focused more on the production of lyrical qualities rather than following the strict boundaries of grammar. For an example:

“This was the most unkindest cut of all.”

Often quoted as William Shakespeare’s mistakenly written line appears in his iconic play Julius Caesar. Today, well, this is certainly wrong as per our grammar standards. However, did Shakespeare know such a rule of use of superlative degree exists? NO!

“Sweet are the uses of adversity.”

For years, the debate was on and later people almost agreed on it. They must have thought, ‘umm… let Shakespeare have the liberty…’ Though it is still dubious by today’s standards as Shakespeare might not have known the rules of partisan – subjects and predicates!

You might find more sentences like this if you go through the bulk of Shakespeare’s produced plays and poems. However, should we really be blaming someone who did not know such rules of English grammar? People often ask almost naive questions – was Shakespeare weak in English? Did Shakespeare know grammar?

People, sit tight. Shakespeare knew the grammar of his day and what he did with that, we all know. We know the grammar of the day; what have we done it? Happy Grammarly corrected weekend guys!

written by Amit for Literature News

Can you write like this? Do you want to contribute your writings to literature news? Visit this page – Write for Literature News

Shakespeare was a plagiarist? Researchers have some findings on his plays

Ready for William Shakespeare’s Avengers? Quirk Books at it again!
Where are the mothers in Shakespeare’s plays? An investigation
Comment