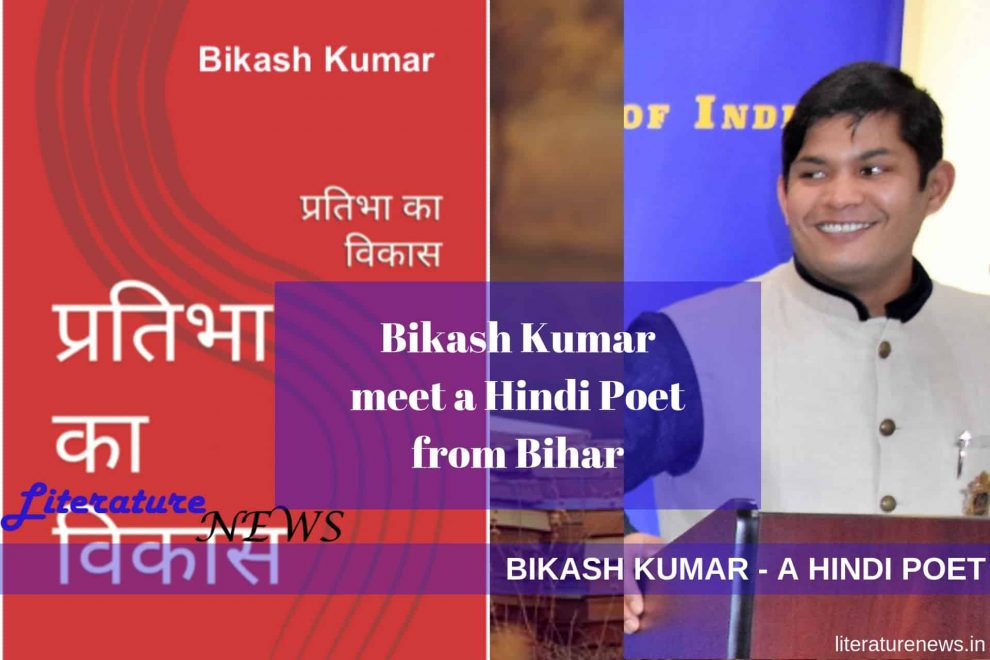 Talent cannot be hindered. This is true to every sense that every word makes and we have adequate examples to see in our society. In literature also, there are many people who have proved this assumption to be true. Shakespeare being grand, there are many others in the field of literature who have excelled in spite of not being from a very affluent background. Bikash Kumar, who takes delight in calling himself Bikash Pratibha Kumar to show his love and respect to his mother, is a Hindi poet who is based in the USA, as a serving official in the Indian Foreign Services and he has his roots in Bihar’s small village in Siwan district. After reading his poetry, I was inspired to write about him.

The journey that began by typing a poem for another poet has been continuous and the poet has written many poems since then. Bikash Kumar’s major concern for poetry is writing for youths. He does not want to be remembered as someone who was merely a great poet – he has great ambitions and those ambitions are rather nobler compared to monetary gains and fame and awards. Bikash’s poetry conveys the contemporary ideas that youths of the day often want to discuss. As he writes in Hindi, the readers who want to read him are many and the readers who can understand his poetry are also many in numbers.

His poetry book, Pratibha Ka Vikas, has recently been published and this book has diversity about it. There are many poems included in this collection and all of them are, more or less, relating to the issues which are mostly contemporary. Country, patriotism, relationship, love, affection, queries, humour, satire and so on… One thing is certain about the poems and that’s the ability to influence the minds of the readers. In the world of Hindi literature, the force with which a poet can strike is certainly the USP of him or her. And that, after reading the collection Pratibha ka Vikas, can easily be said about Bikash’s poems. His humour, as well as his ideas, are the striking force in his poems.

I will also be reviewing his poetry book very soon. I will have to read his poems carefully. Bikash has a strange but effective ability to convert simple ideas into very forceful messages. He writes on many issues which affect our society today and the biggest one is terrorism. You can know more about Bikash Kumar by visiting his official website – https://bikashpratibhakumar.in/

article by Suchitra for Literature News

Meet the experience – authors to begin late but reaching there sooner!
Pravin Anand – the author for occasions
Comment