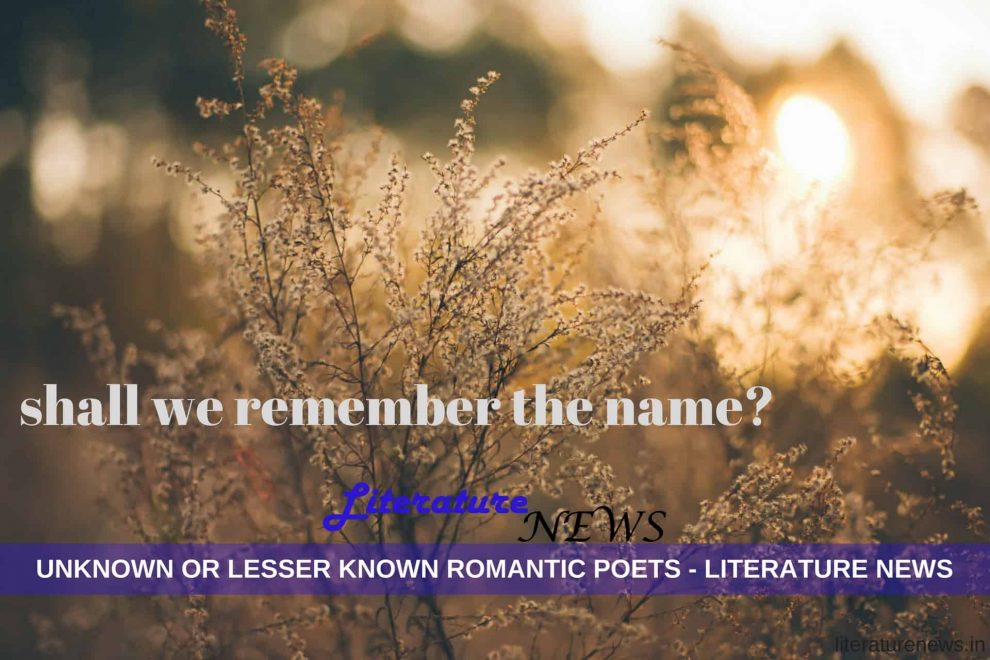 There are the poets to be called the romantic poets and about whom your professors might have told you during the long and exhausting classes in your colleges or universities. However, there are also the romantic poets whom you might not have bothered; you may still not be knowing them – and why should you? They are not very famous because the eclipse of Wordsworth was darker enough to keep their letters and metaphors away from the limelight. Today, I will bring a few of them to the light – the romantic poets whom most of the literary students may not know at all!

Felicia Hemans: (1793-1835)
How many of you have googled her name right now? Be honest and be casual – there is no need to be anxious. She was not a great poetess; she wasn’t a dull one as well. Her poetry was marked with simplicity and melody. Her poetry was down to earth and it was meant to be enjoyed and sung – not mulled and appreciated for the critical qualities. You can read most of her poems online which are archived on several websites.

John Clare: (1793-1864)
Clare’s life was long! However, his fame (which actually did not take off) did not last that long and his words were forgotten very early. Clare was not very best to be put in the same bracket with Wordsworth and other heroes of the Romantic era. However, within his limitations, he was a master when he painted the rural landscape and wrote about the lives of peasants. Unfortunately, most of his verse went into the darkness of oblivion as soon as they published! And even unfortunate was his death which took place in a mental asylum!

James Hogg: (1770-1835)
Born into a shepherd’s family, James Hogg was not a very good poet and neither a good farmer. However, with the little education and the scanty information of the world’s unruly behaviour that he had, he managed to produce some of the poems which kept his name afloat for sometimes even after his death which naturally faded with time. His poetry was marked with lyrical qualities but very less of the critical elements such as timelessness and ‘beauty’.

Samuel Rogers: (1763-1855)
Did you know him? I bet not! Samuel was a rich admirer of art and he was famous amid the literary circle of his time not because of his meritorious verse but for his breakfasts! Indeed, some of his produced works of poetry accounted for appreciation and admiration but he wasn’t a permanent poet to be on the receiving end of praise. He was a very fine artist of words but he could not produce much of the praiseworthy verse in succession. However, he was very generous in assisting the artists and men of letters with financial help.

If you are seriously indulged in following the romantic poetry of England, you must be aware of the parodies which were written by these two poet brothers. The collection of parodies contained the parodies written of the poems of the great poets of romantic age – Wordsworth, Scott, Coleridge and many others. These poems were marked with wit, humour and occasional spark of genuine emotions. Their most known work is Rejected Addresses which came out in 1812.

So, folks, these were the lesser known or even unknown romantic poets for you. Hope you will like the names and now, remember the names as well! Literature News will keep bringing more lists like these in the coming days of 2018.

by a special contributor to LN