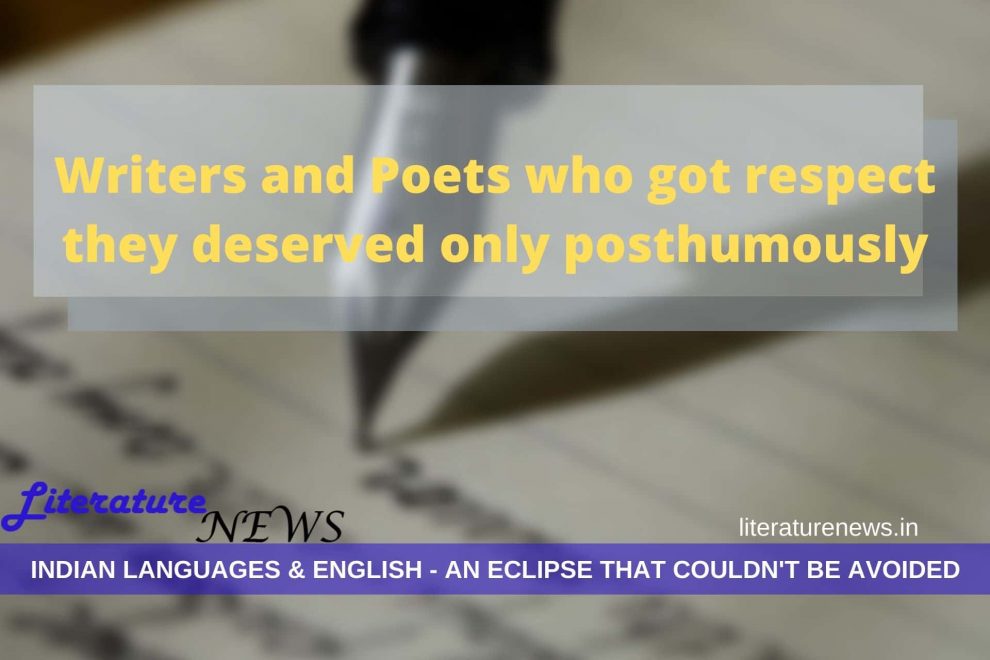 There are instances on the line that we call timeline for sad mistakes and misfortunes which we acknowledge later and ponder to find the facts which may be shocking and ugly. In the progress of literature and art, the contributions of writers and poets are immense. The world acknowledges the same as well. However, there are the times when we realise that many writers and poets did not get the respect and appreciation they deserved and it was only posthumously that they got what was due. Is it fair? This subject may find scholars debating for years and still not be able to conclude. However, it is certainly the fact that such episodes have happened many times in the past and may continue occurring time and again the future as well. Today, I am listing a few writers who, for many reasons, did not get the readers’ and critics’ respect and appreciation for their deserving contributions to the progress of literature and art (and also science).

John Donne: Who can forget John Donne? The poet who brought the concept of metaphysical alive in his poetry, Donne, unfortunately, didn’t get the approval of readers and critics in his lifetime. His poetry remained inside the closed doors of poetic realms and readers found it unworthy and inflammatory for almost three centuries if we ignore the massive effort that John Dryden put in bringing Donne’s poetic virtues to life. Dryden devised the idea of using the term metaphysical with respect to the poetry of Donner and others he identified as Metaphysical Poets. The major that literature scholas will agree has been played by T. S. Eliot who defended Metaphysical poets and almost resurrected them to live from the depths of the poetic abyss. John Donne, thus, in the twentieth century, got what was due to him.

G. M. Hopkins: Gerard Manley Hopkins was one of the most ignored poets during their lifetime. He was a poet of the Victorian Era who remained oblivious of respect and fame for his poetry. It was only after the mass publication of his poems by Robert Bridges that Hopkins became famous among poetry lovers of the 20th-century. Not only fame followed Hopkins’ name but he also had his influence felt and acknowledged by the leading poets of 20th-century like T. S. Eliot and W. H. Auden. After Donne, Hopkins is the most accomplished literary personality who gained his due posthumously.

Francis Scott Key Fitzgerald: Popularly known as F Scott Fitzgerald only, wrote many bestselling Jazz-age novels in his lifetime and won fame and money. However, the true reward for which a novelist writes is not having much money and fame. It is the respect of critics; it is the appreciation of serious readers for which a novelist strives all his life. Fitzgerald did not win the respect and critical claim in his lifetime and it was only after his death, a little delayed, that he won the critical appreciation for his works which was long due. Have you read any of his novels? You may have heard about DiCaprio in the movie The Great Gatsby. The movie was inspired by a novel of the same title by him. You can get his novels from Amazon India to suit your serious reading concerns. Click the link below:
Buy the novels by Fitzgerald – click here to buy from Amazon India

Srinivasa Ramanujan: If you are thinking I am making a mistake by including the name of great mathematician from India, Ramanujan, you are wrong. His collections of mathematical formulas and theorems did not get the due credit and much-deserved applause from the scientists and mathematics’ community. Only after his death, when science could be able to grasp today what Ramanujan did almost a hundred years ago, his works brought to him the respect that he deserved. He is not only the most shining jewel on the crown of Indian mathematical supremacy but also the most talented mathematician that the world could ever witness.

Jane Austen: It might surprise many readers of this article but Jane Austen was also one of those unfortunate authors who did not get the respect and critical claim that she deserved. It was because of restrictions on women of the day in England (ironically, the Great Britain which enslaved many countries to teach them civilisation used to practice locking the virginity of women and also restricting women from nay public activities). However, it was only after her death and also almost a century later that Jane got the readers’ affection and also the critical conjecture for her works. And her works are so debatable and relevant that her fame has almost become eternal. If you a reader of classics, you can buy her novels from Amazon India by clicking the link below:
Buy the novels – click here to buy from Amazon India

So, this is our list for now and we will be back with more interesting lists in the future. Hope you found this article useful.

5 Indian Women Authors You Should not Ignore! A List
Our ‘Beloved’ Toni Morrison is no more!
Comment